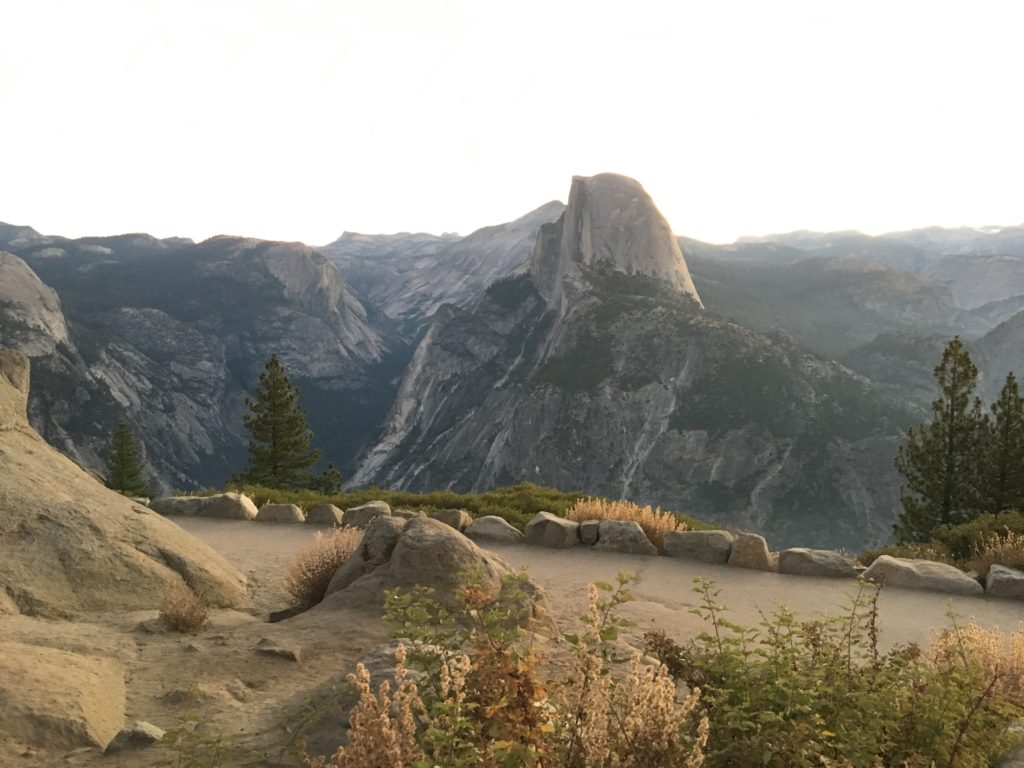 View of Half Dome from Glacier Point

At 8800 ft above sea level, the iconic half dome, the highest point in Yosemite valley, is a towering monument in the 3rd most visited national park – Yosemite. John Muir wrote “No temple made with human hands can compete with Yosemite”. Muir camped at the yosemite valley with President Roosevelt and an outcome of that camping trip was the creation of this mesmerizing national park and protection of a nature’s marvel that has been sculpted deep and wide with glacial activity over several thousand years.

Most visitors get the view of the unmistakeable and unique shape of the half dome from glacier point and many other drive up view points. Then there are others, less sane perhaps, who come here because they won the lottery for the permit to climb half dome.

A maximum of 300 hikers are allowed roughly split as 225 day hikers and 75 backpackers each day on the Half Dome Trail. Permits are distributed by lottery via Recreation.gov, with an application period in March. We, group of 6, won the lottery for a climb on October 6, 2017.

At one time, half dome was considered inaccessible. A 1865 report stated “perfectly inaccessible, being probably the only one of the prominent points about the Yosemite which never has been, and never will be, trodden by human foot”. About 10 years later, George Anderson set the precedent for today’s route with steel cables by successfully reaching its summit. 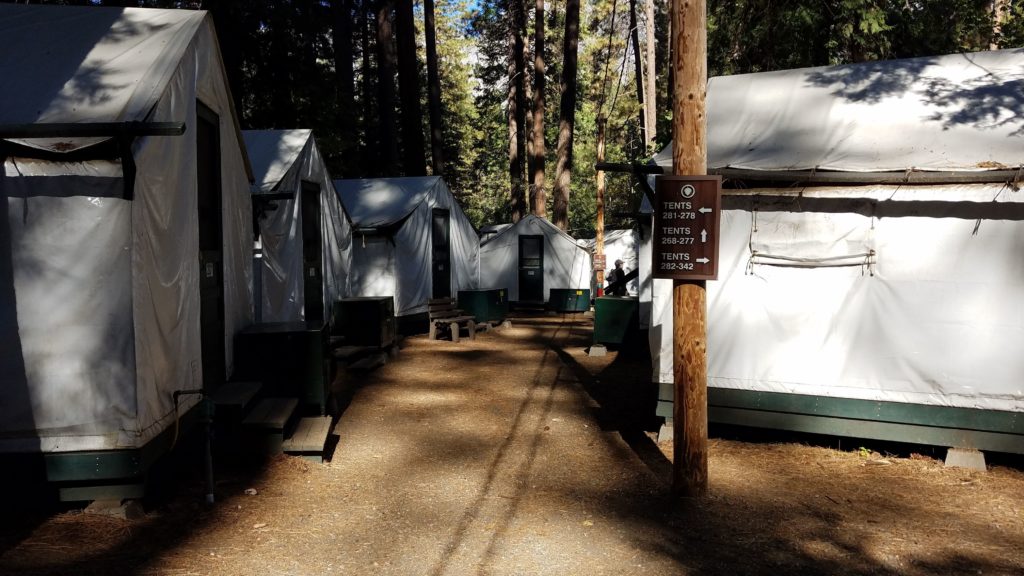 Tent cabins at half dome village

The hike starts close to half dome village, deep in the Yosemite valley, where we stayed the night before, and is about a 16 mile loop going up on misty trail with some spectacular views of Vernal and Nevada Falls, Liberty Cap and the insurmountable-looking half dome itself jetting up into the sky. We started at 5 AM, well before sunrise, with headlights. This being just after the harvest moon night, the early crisp morning was glowing with the heavenly moonlight. The mountains had this surreal glow that captivated my mind, as if in a trance, we paced up the steady climb towards the nearly 5000 feet of ascent. 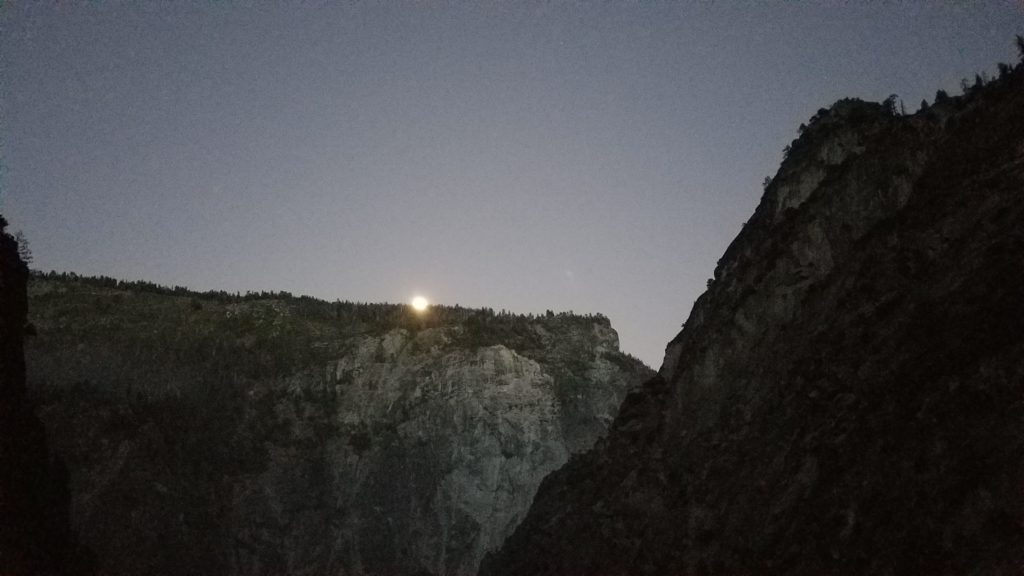 The moon peeking from behind the mountains…

I felt myself gasping for breath even early on with the climb remaining steady and steep. As we got to the base of the vernal falls, the roaring sound of the water rushing down more than 300 ft in three streams overtook all sensations in the body and mind and it felt as if I was in the Elven realm of Tolkein’s Rivendell. 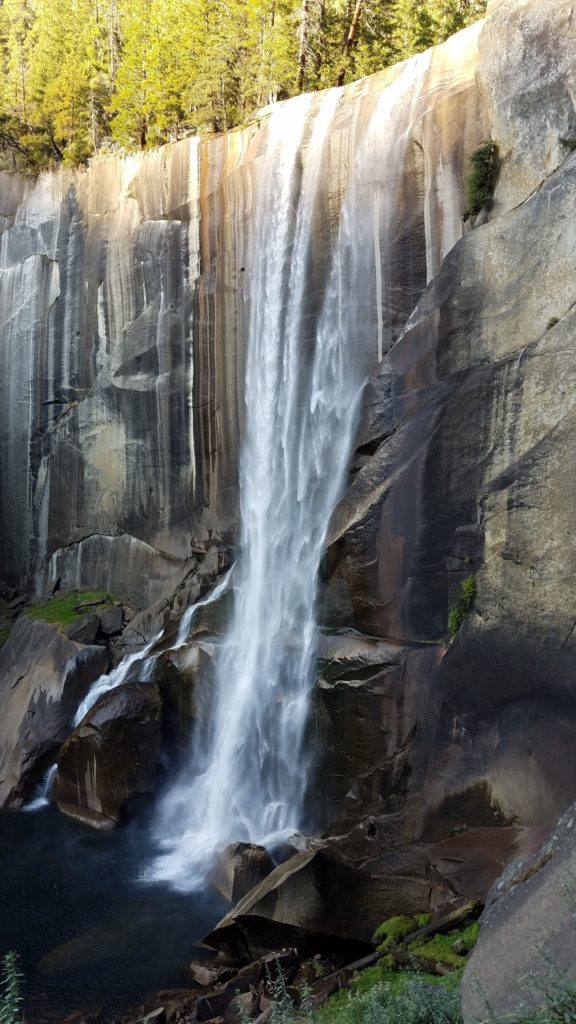 We continued through the wilderness and to only to be impressed upon by Nevada falls falling at a steep angle down the granite mountains, looking silky smooth as if an army of white stallions were galloping down. 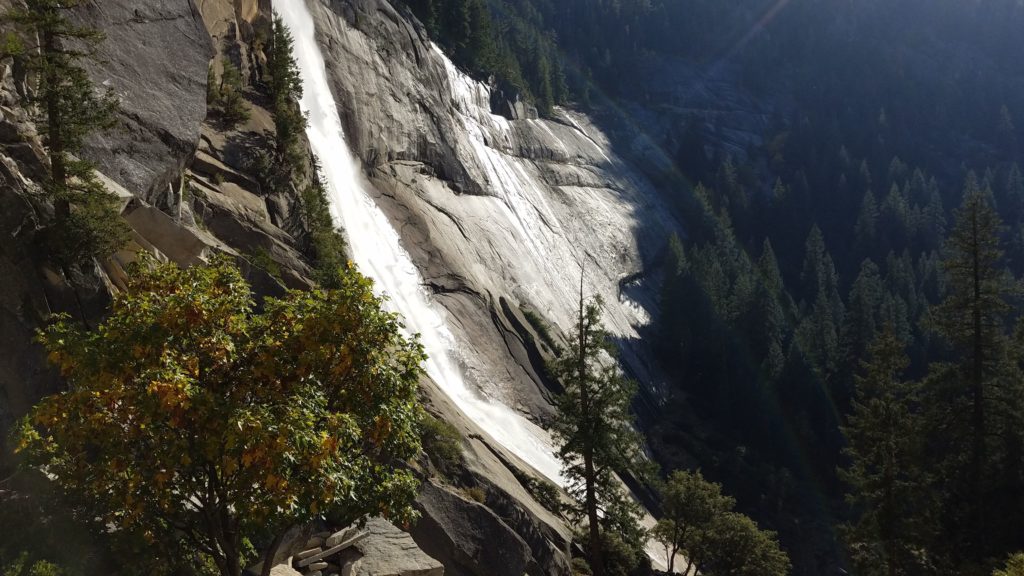 At 7076 ft, the towering liberty cap on the left hovered for a while and eventually half dome came into view. After several hours of the hike, half dome still looked far away. Other hikers kept greeting us “Good Morning” and I felt like it must be late in the afternoon, but it wasn’t. I needed frequent breaks to have a quick snack and hydrate. 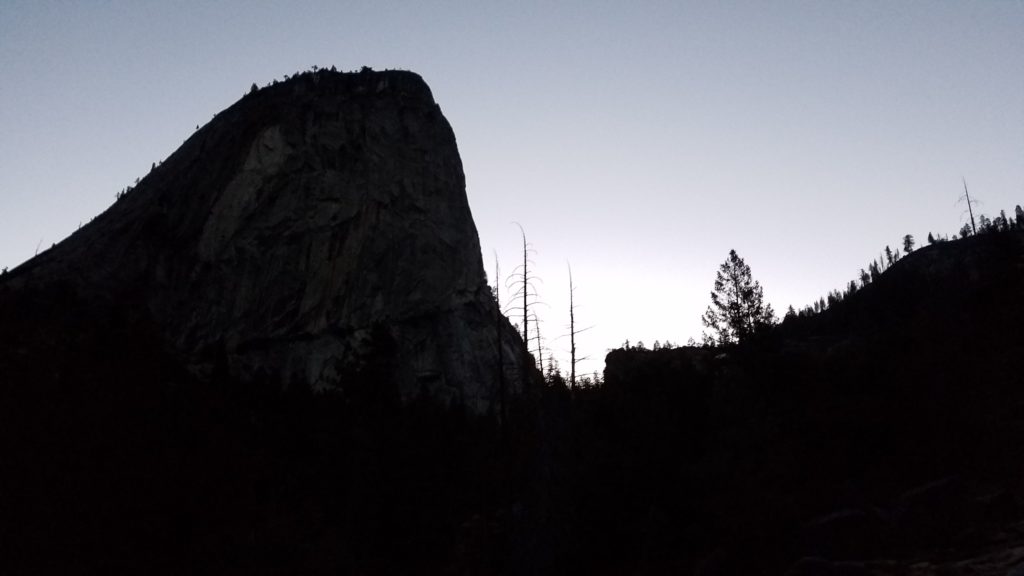 Leaving the woods behind, we ascended a large granite bare rock that looks like a mini-me of the dome via steep stairs sculpted out of the exposed rock. In my opinion, this sub-dome section is one of the most dangerous section of the hike given the exposed nature and steep climb with no support. At the end of this incredibly steep sub dome, we reached a small flat section with the half dome directly staring down at us with our first view of the infamous steel cables. This is a good place to gather courage, refuel, re-hydrate and gather your focus before taking on the final climb that exceeds 50 degrees of slope in some places. 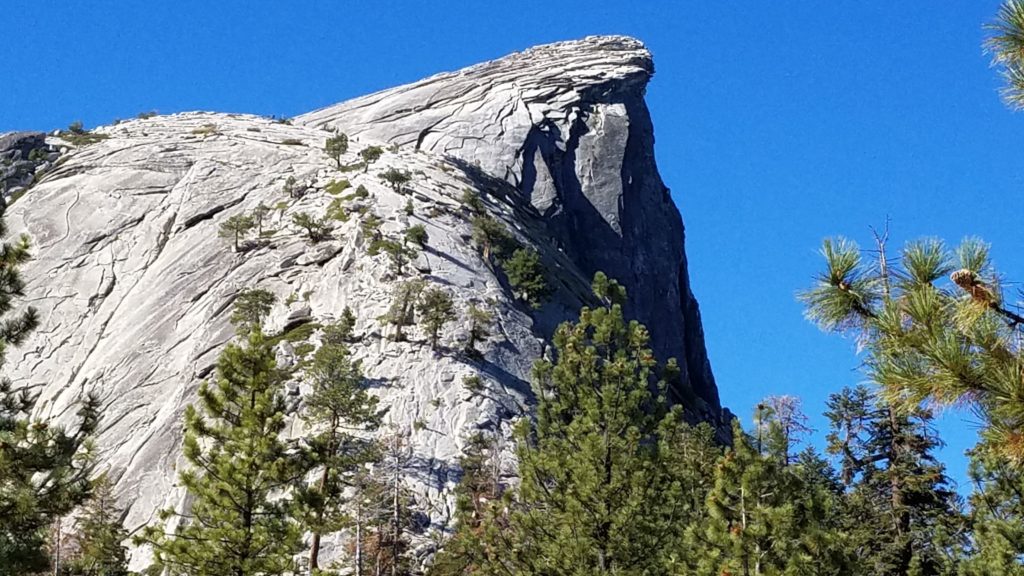 View of sub-dome with half dome at back 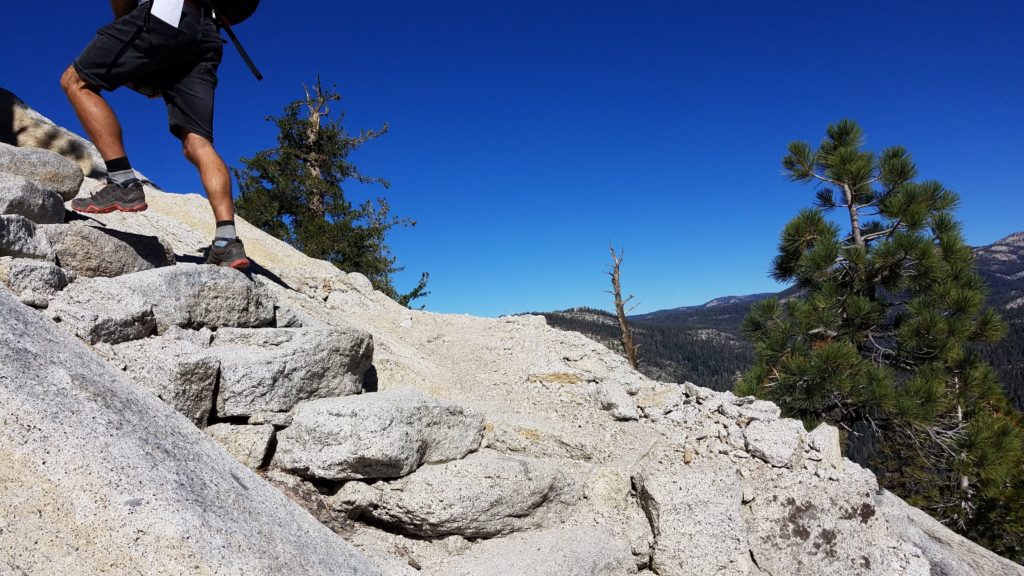 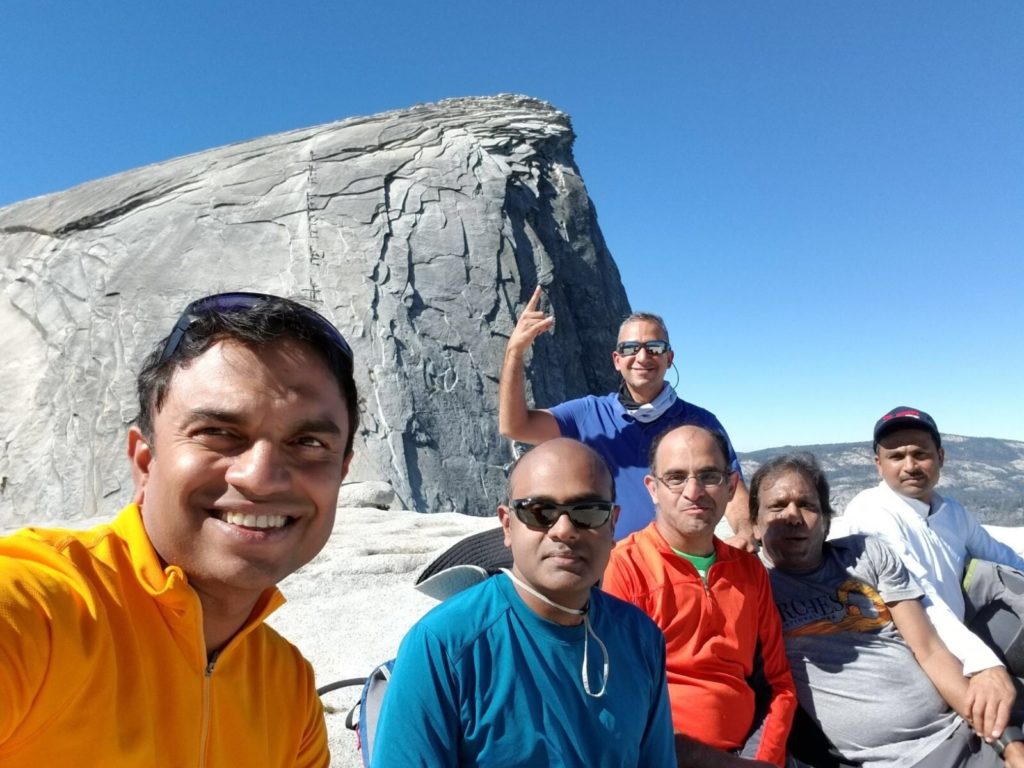 Thanks to the permit system and also our early start that there were relatively few climbers on the steel ropes. We started on the final climb with rubber gloves to get a grip on the cables and took advantage of the wooden slats every few steps to rest and catch our breath. This section is steeper than it looks and it requires both upper body strength and leg strength to stay steady on the climb. I felt the heart and mind race every time I took a few steps to reach the next slat for gaining my steady foothold. 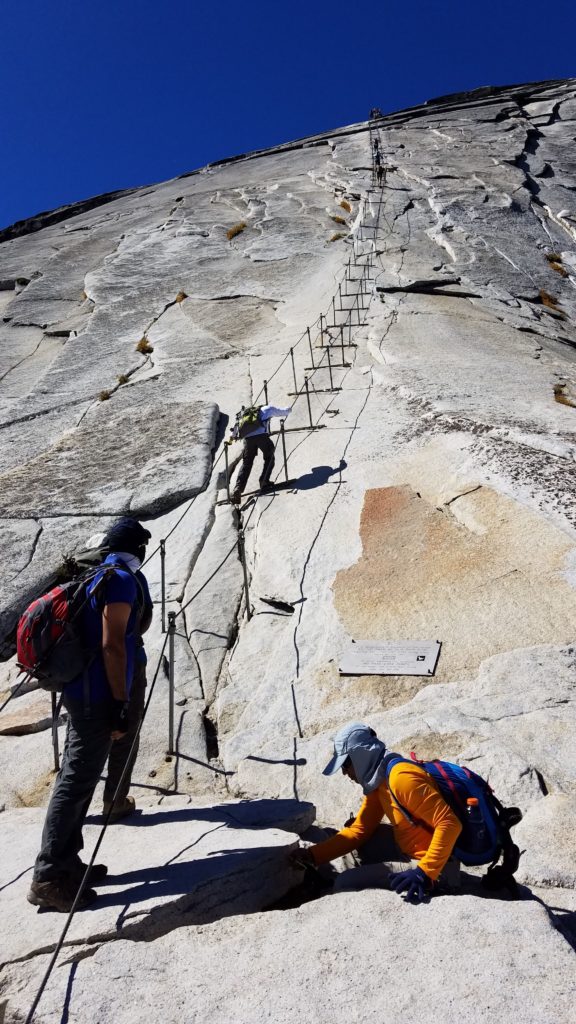 Finally, steel cables up to half dome summit

There was an indescribable thrill, fear during this climb, particularly for our group with no experience in rock climbing. Once we passed the steepest central section, it got gentler towards the end and voila, we finally make it to the top of half dome. 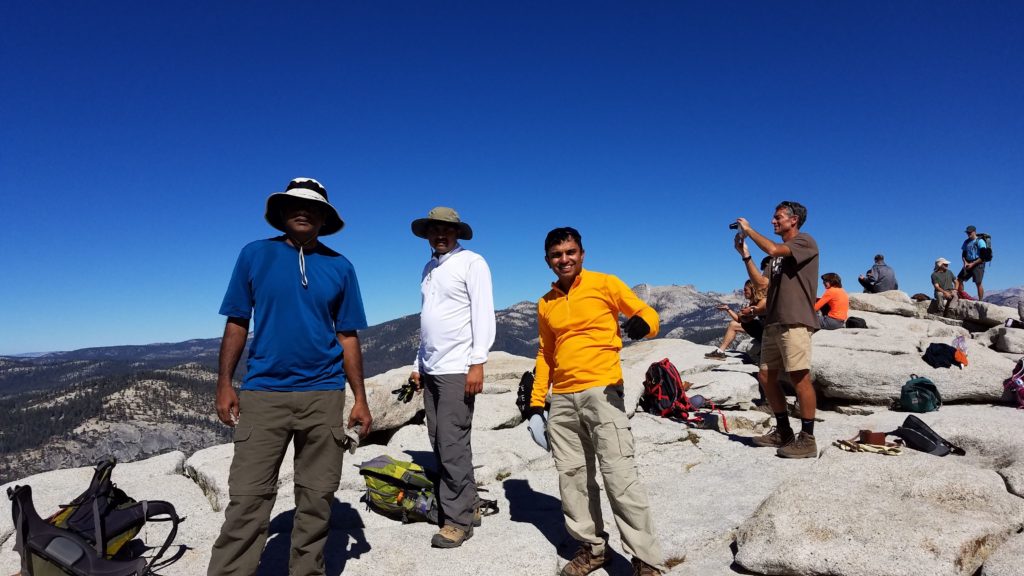 At the top of half dome… 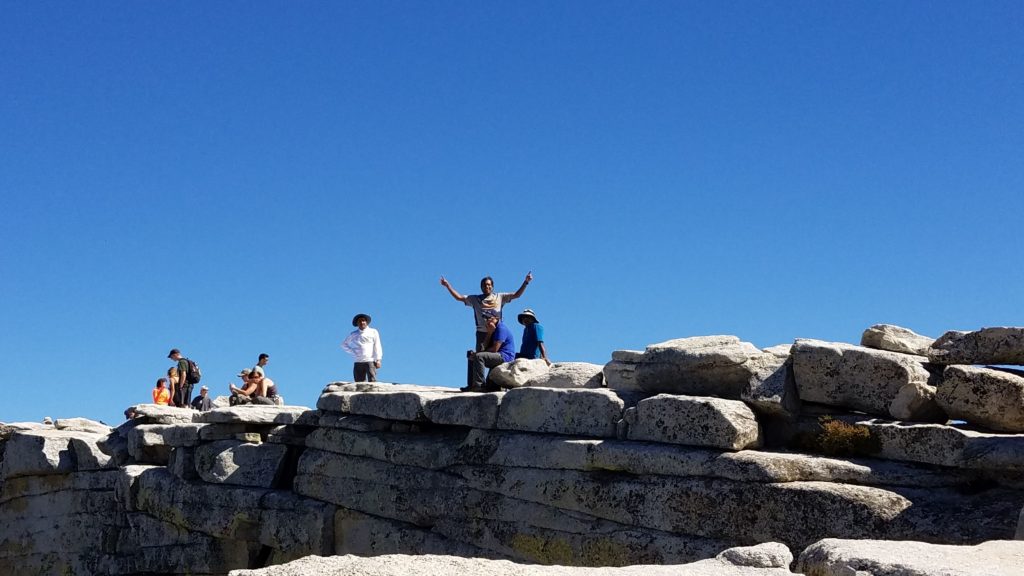 Top of half dome across the dome…

We spent over an hour on top, enjoying the views of the surrounding granite towers and the valley under clear blue skies and no wind! The weather couldn’t have been better. After many photo moments and rest, the descent down the cables looked just as challenging. By now, a crowd of people were lined up on the cables to go up. Turning around and walking down backwards like coming down a ladder proved to be effective. I was sliding my hands on the steel cables (with gloves) and stop at each slat before continuing down. On the way down, being later in the day, the traffic up the steel cables was now significantly higher. 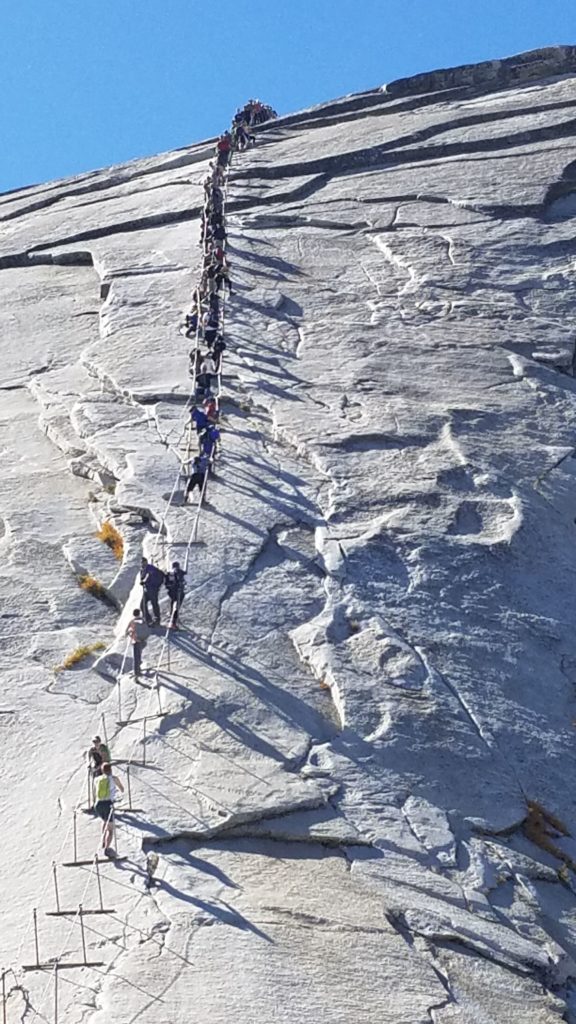 Increased crowds on the cable section in the afternoon

It ultimately took us about 13 hours including the 1 hour stop at summit for the entire trip. A perfect end to the grueling but exciting day was chilling at the half dome village’s extensive dining room with some really great local food and beer. 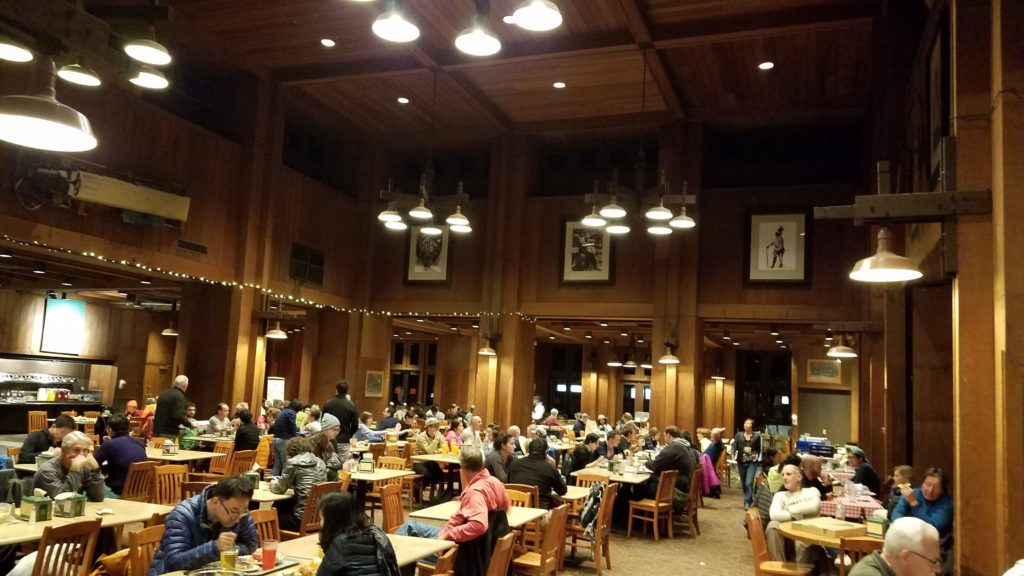 Dining Hall at Half Dome Village

While physically exhausted, all of us felt humbled and grateful that we were blessed with this phenomenal weather and a supportive group to make this successful ascent possible. This counts as one of the most memorable hikes of a lifetime.

2 thoughts on “Climbing Half Dome at Yosemite National Park”