Although the highest peak in Colorado and the second highest in the lower 48 states, Mt. Elbert does not have the fame of Long’s Peak in Colorado and elsewhere. But don’t let this dissuade you from climbing this mountain. This mountain packs an unforgettable punch to any brave heart, in every aspect, before rewarding the hiker with some of the best views and a sense of fulfillment, happiness and accomplishment. 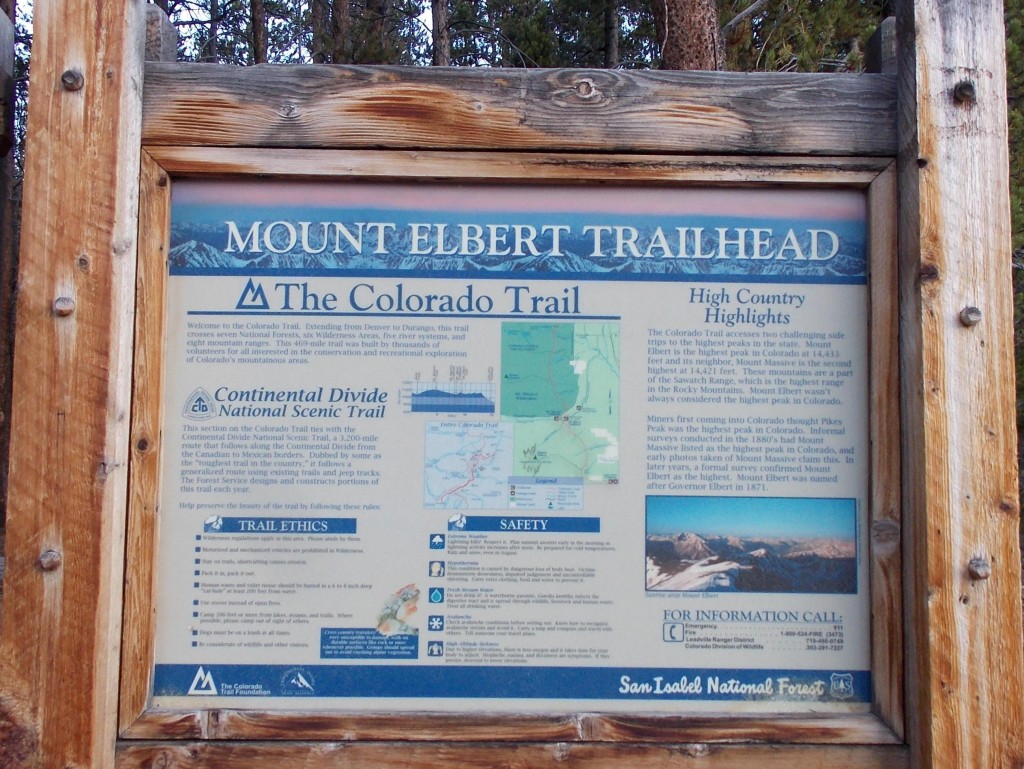 I was part of a group of ten high spirited folks from diverse backgrounds with varied levels of hiking experience, organized through a Meetup group,  that attempted to Summit on the full moon day of August 29, 2015 via the Northeast Ridge Trail. We rested at the Leadville Hostel, the night before the hike, which is convenient and hiker friendly. 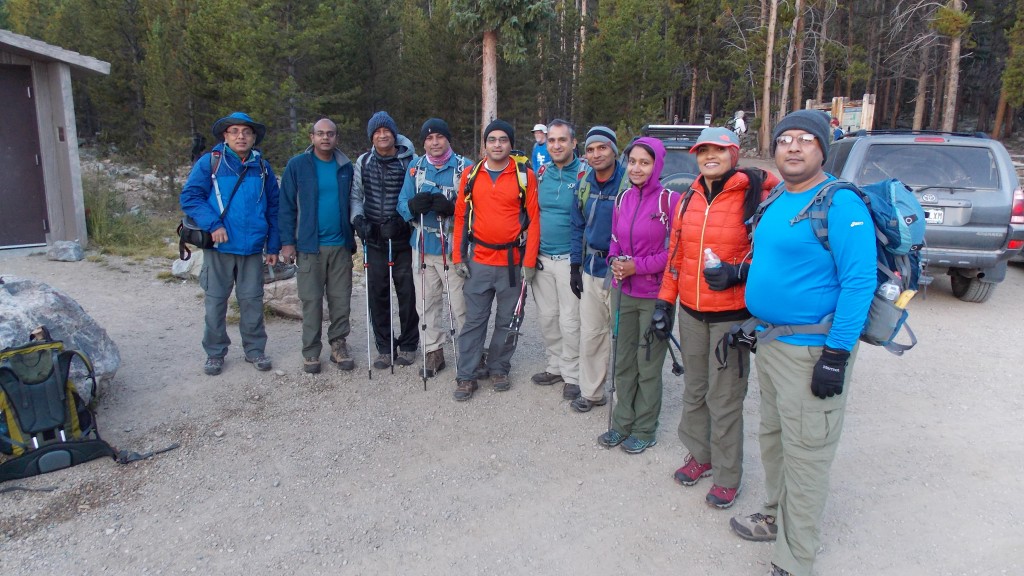 Our group at the trailhead… Ready for the hike!

An early start through the treeline was relatively smooth. 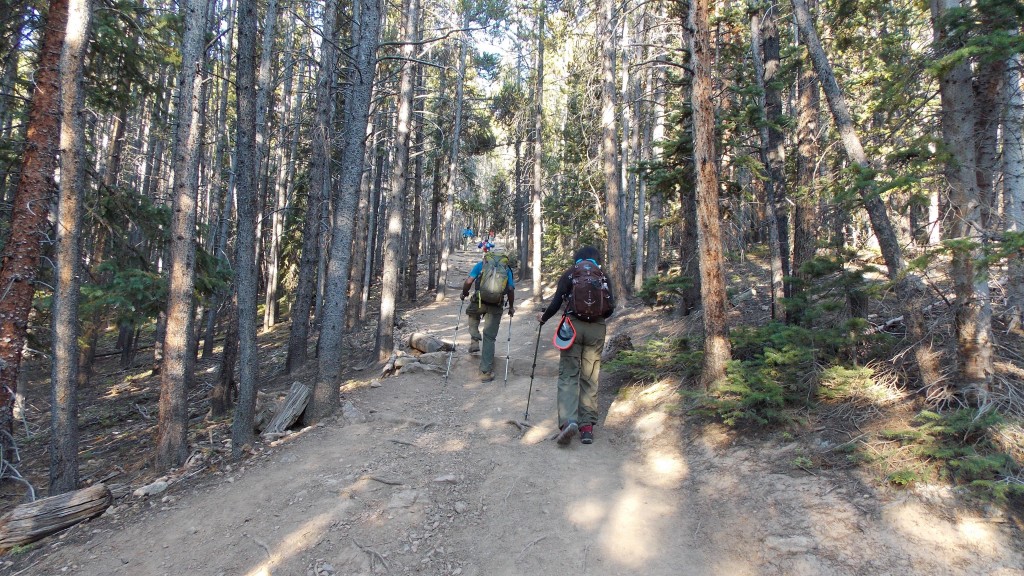 Once past the tree line, the group scattered – the kind of divide you get during a marathon run. 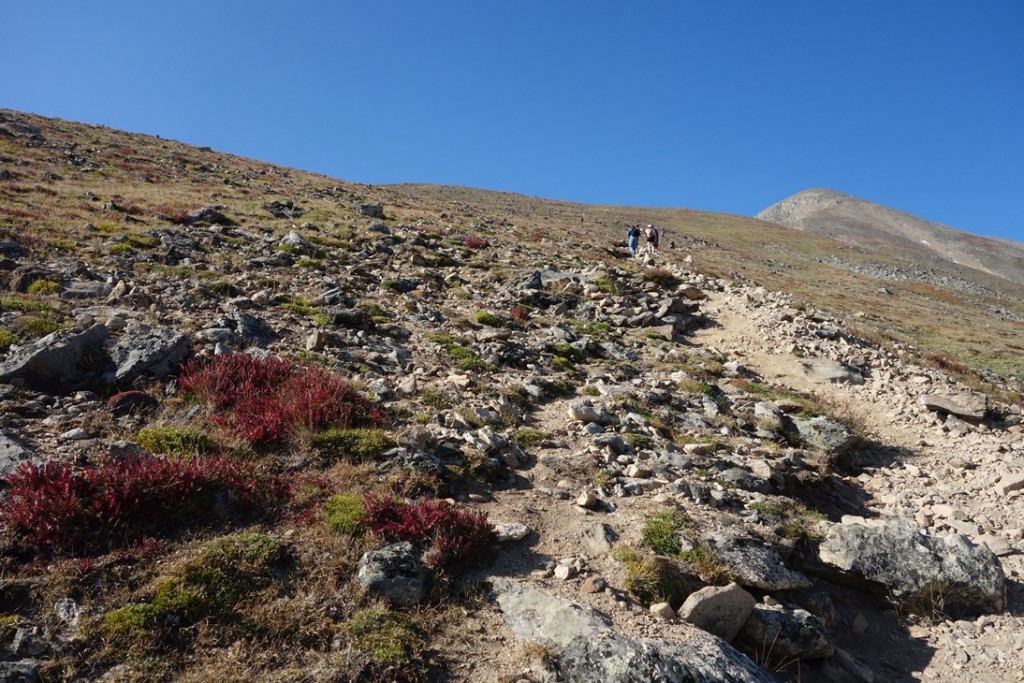 Towards the first false peak above the tree line

Some at the front, keeping up a steady pace, while others adjusting to the altitude through frequent breaks to catch their breath. Apart from our group, there were so many other groups of people, all with the same mission, to scale this majestic peak on this glorious day, that we would keep swinging by, passing each other periodically. These strangers became familiar faces, soon to be silent friends, with an understanding nod and smile, silently motivating each other to keep going, keep breathing. 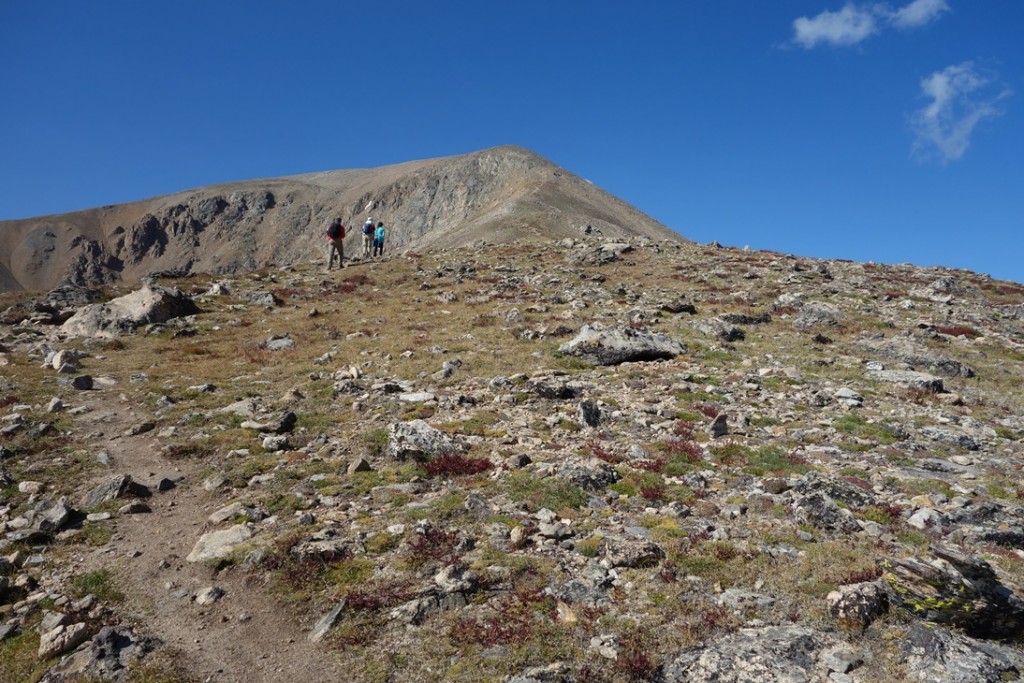 Getting steeper and higher

A little later above the treeline, we got sight of the first false peak. As you make it to that peak, it is as if the mountain is smiling at you and pointing you towards the next peak behind it. It turns out we are fooled again! At some point later, a steep section with loose rocks and slippery slopes leads to a “peak” that has a ravine like face on one side and a steep angle, like a double black diamond ski slope, on another side, comes into view. This section goes from about 13,200 feet to 13,900 ft in less than half a mile and is known as the talus-scree ridge. 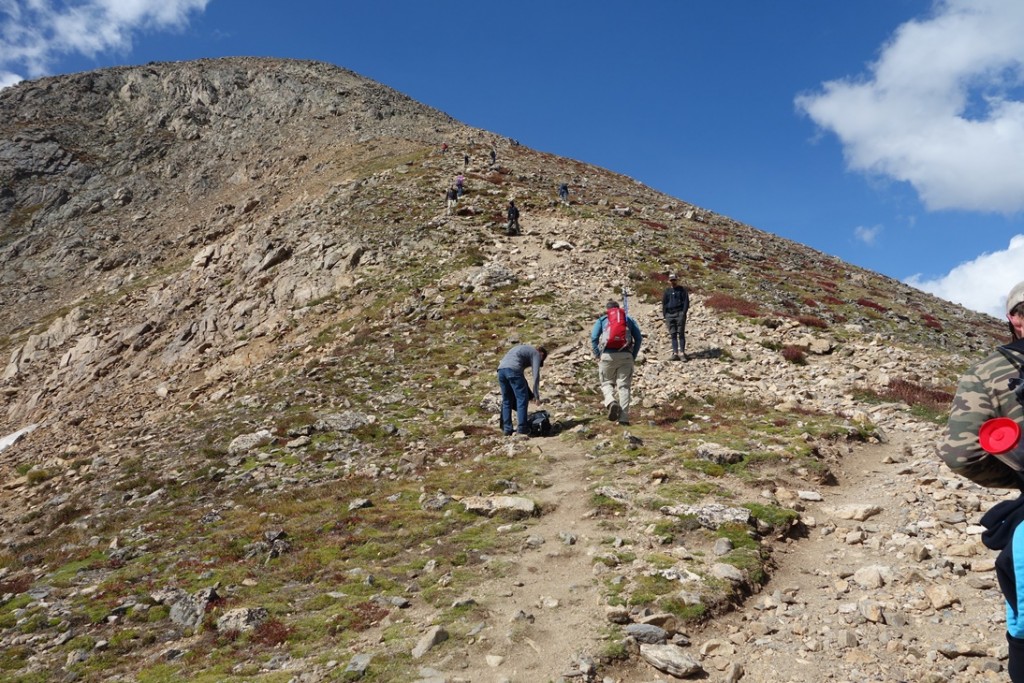 This is the hardest section of the whole hike and many turn back at this point due to sheer exhaustion and feeling the effects of altitude. Dark clouds periodically move in and threatens to bring on the notorious afternoon thunderstorms that greatly increases the chance of lightning strikes. A light breeze keeps steady requiring us to layer up. To our relief, the sun shines through and the clouds keep drifting, but everyone around gets that sense of urgency to be down before the weather turns bad. The hikers warn each other to keep any eye for lightning clouds. 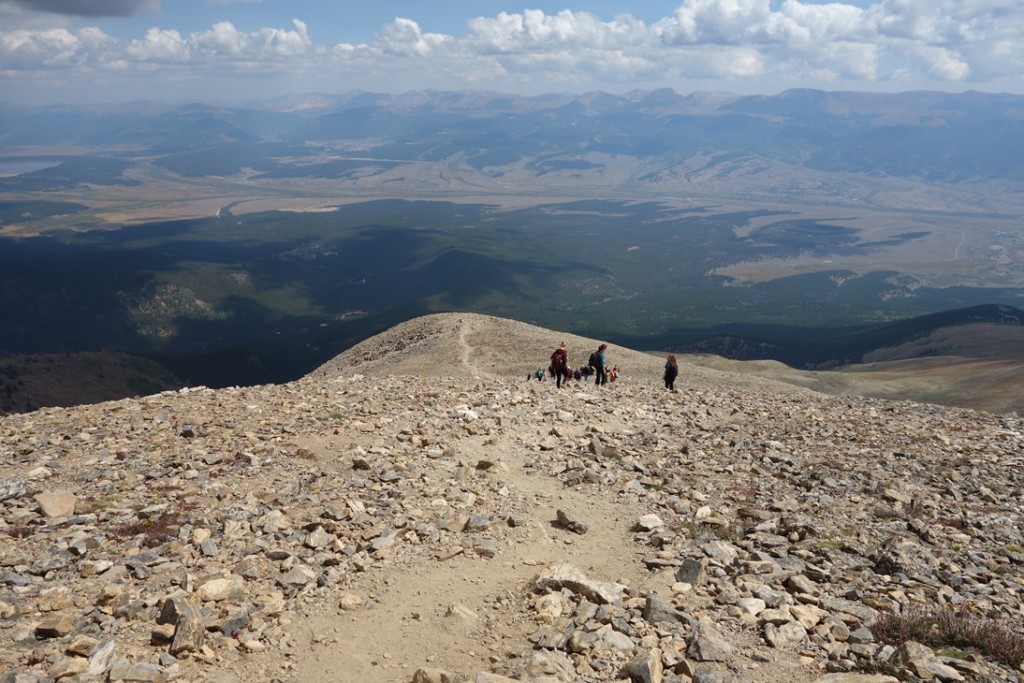 As you go past the ridge, this turns out to be yet another false peak, but now the real peak comes into sight for the first time. The satisfied and blissful look on all the faces coming down from the summit, all smiling and happy, pumps the Adrenalin in us for that final push to the summit. 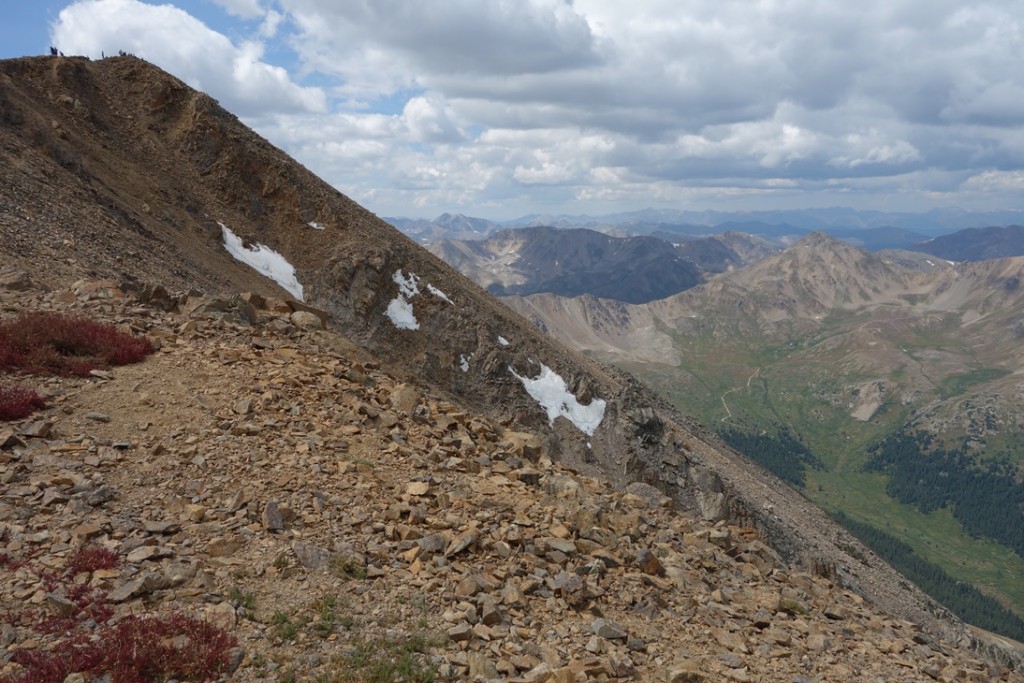 View of the peak – Mt. Elbert here we come! 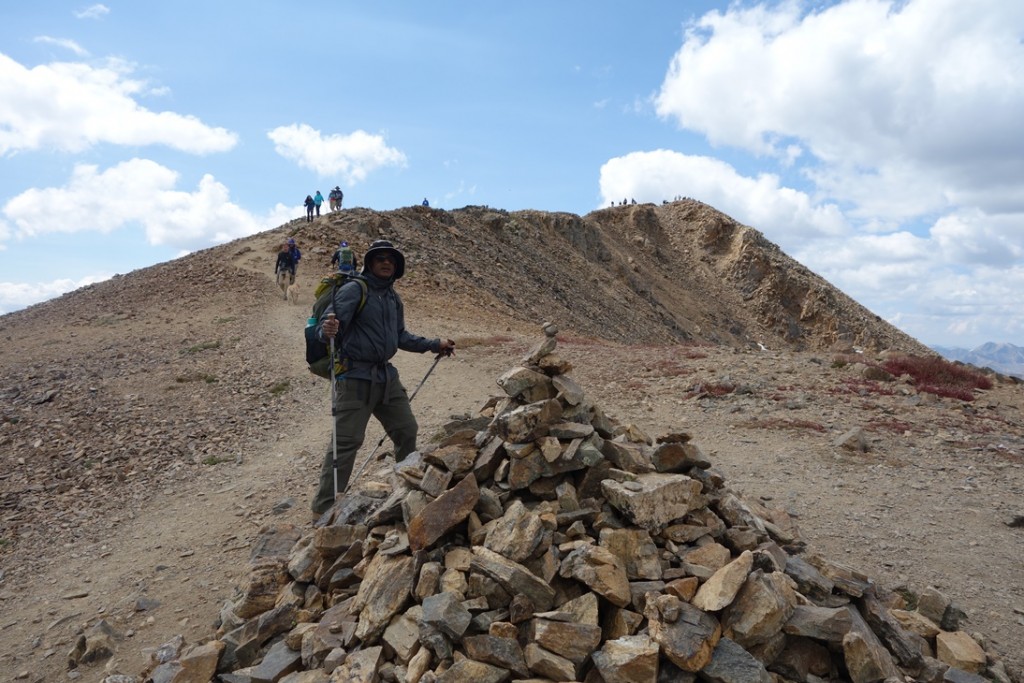 Top of the false summit – Almost there…

Eight of the ten in our group, make it to the summit including the two never-give-up attitude women – hats off to their perseverance and positive energy! Also, our oldest member, a 67 yr old, makes it to the peak and brings out a song and dance – very inspiring! Once at the summit, we celebrate with all those strange but yet familiar faces, we saw so many times, as if part of the same family, congratulating each other on this memorable journey to the summit.

While some of us have been up to Kilimanjaro, this mountain challenged all of us to our core, particularly given our lack of acclimatization, time pressure to be off the mountain before the afternoon storms, and the many false peaks. The many false peaks teaches us a lesson to not give up and keep focussed on one step at a time. Kudos to the team for such a great team effort and returning with high spirits just to have been on the mountain and part of something special – peak or no peak. Cheers!

Mt Elbert – A view to last a lifetime!