Over my previous hikes to Mt. Washington, I came across several  hikers, tired faces but filled with excitement, who were on this quest of the presidential range traverse hike in a single day. I must admit, it always sounded insane, trying to walk across the high ridge of the presidential range with a total of 23 miles on a long summer day. This is a strenuous hike with over 18,000 ft of combined upclimb and downclimb. That is no joke and people often train for months for this big day. Weather is known to be unpredictable in the white mountains, making this somewhat a dangerous hike.

As we pulled into the trailhead parking lot, off of Rt 2,  at 4.35 AM on Saturday June 22, just a day after the summer solstice, the parking lot was overflowing into the street. Upfront, we decided to skip Madison and go up airline trail, a direct and steep route to Adams peak, 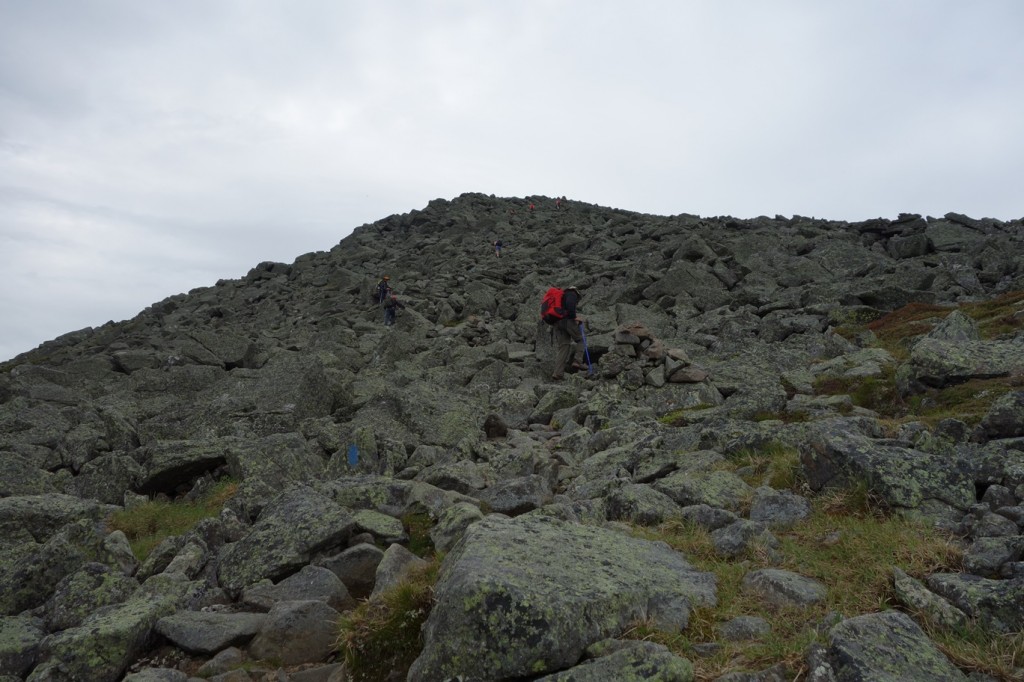 Climbing the rocky terrain of Adams

and continue on to Mt. Washington via Gulfside and then take Crawford Path to Ammonoosuc ravine trail down to cog railway base. This arrangement was necessary since we were dependent on another group for a ride from the cog railway base back to Rt 2 to pick up our car. Nevertheless, this is already a daunting 15 mile hike. This would be our preparation hike to attempt the full presidential range next time. To help maintain a good pace for the hike, I encouraged the team with the famous John Wooden’s maxim  “Be quick, but don’t hurry”, which was apt for a hike of this magnitude.

Up on Adams peak, we had clear view of Mt. Washington.

Although the views were spectacular along the way, the slog from Adams felt never ending like walking on a road to nowhere. Mt. Washington remained in sight, far away at a distance, majestic and above everything else; it was an inspiring sight that kept us going. After a while, walking the rocky terrain and jumping rocks became second nature to us. 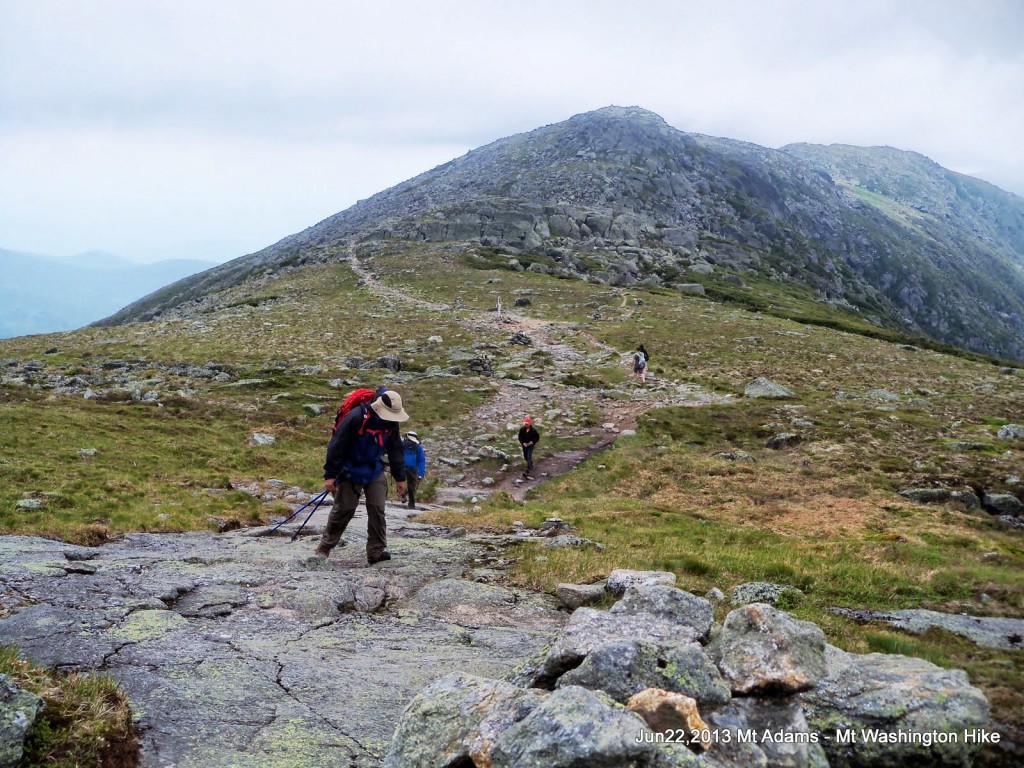 The long road to Mt. Washington

On our final stretch to Washington, we came to the intersection of Gulfside with Jewell trail. For a moment, we considered to bail out and skip Mt. Washington and make our way to the cog railway base via Jewell. The sky was getting dark with thick black clouds and the peak was no longer visible due to cloud cover. A real ugly thought. Within seconds, we decided not to give into the temptation! Instead we briskly made our way up to the top of Mt. Washington pushing our way through the clouds. 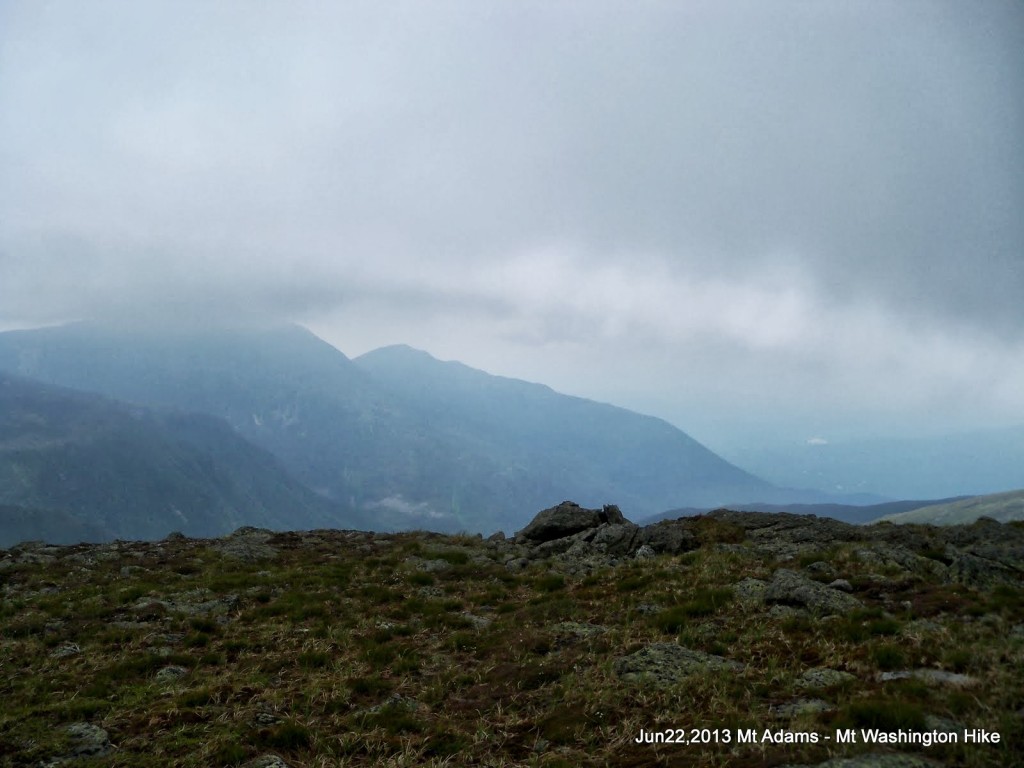 As soon as we reached the cover of the Washington observatory, there was a loud cloudburst with heavy downpour that lasted an hour. It was as if the clouds were waiting for us to get to the top and then literally burst open. We felt lucky to have escaped this angry downpour. Within minutes, the hikers coming into the observatory were soaked and dripping wet. 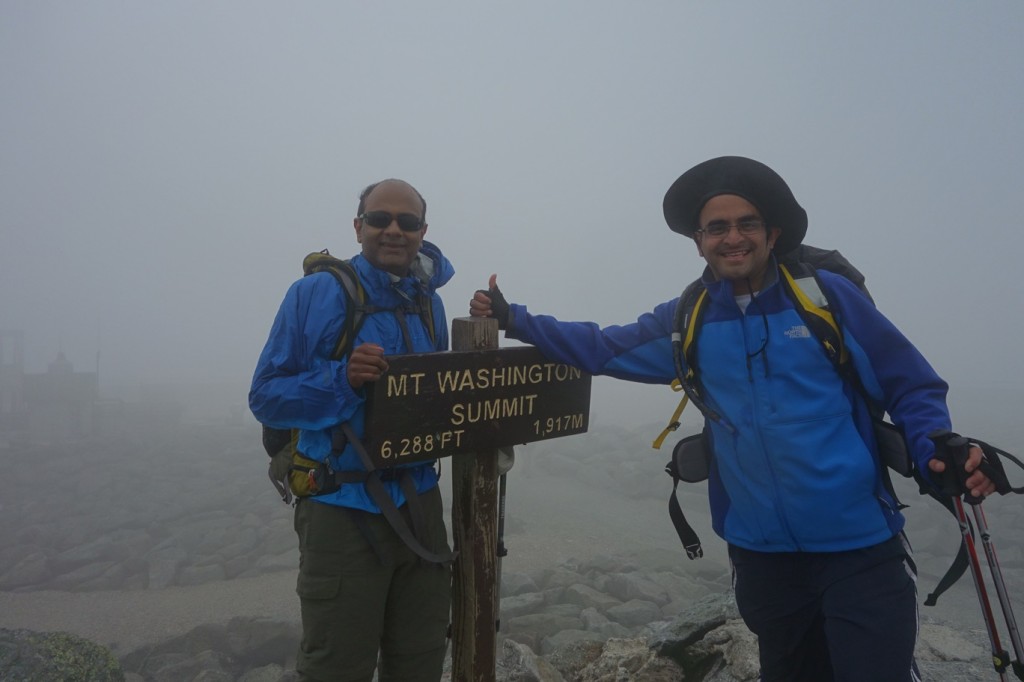 After a quick hot lunch and refilling our Camelbaks, we started our way down the Crawford path. The rain had subsided with just a drizzle at this time. Taking this as a sign of blessing by the mountain we continued down.  After crossing the Lake of the Clouds hut, the trail turned steep with the wet conditions making them into water slides, requiring extra care to come down.

We reached the cog railway base by 7 PM. We had covered about 15 miles in about 14 hrs which included a full hour break on top of Mt. Washington. A very satisfactory hike indeed which paves the way to a full presidential hike sometime soon. That doesn’t seem insane after all. It is all about the satisfaction from conquering such a challenge and telling yourself – “Nothing’s Impossible”.

One thought on “Mt. Washington via Adams and Jefferson”