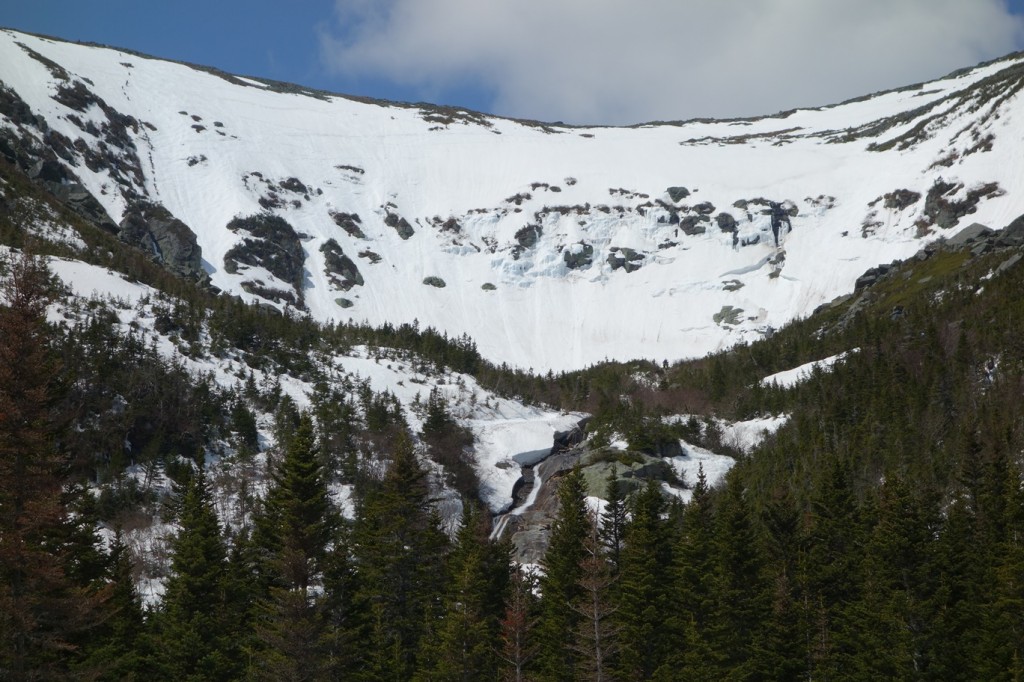 April is peak season for what is a ritual for over 90 years at Tuckerman’s Ravine – hundreds of extreme skiers gather daily at this unique glacial cirque on the southeast face of Mt. Washington in New Hampshire. The high winds, above the ridge, feed the ravine with tons of snow, throughout winter, making this a spring skiing haven for thrill seeking skiers and mountaineers alike. Instead of a ski lift, there is a human lift unlike anything I have seen before – a long orderly line of skiers walking up the steep ravine with their ski boots. Climber after climber kicks in the same spots forming almost perfect stair steps for going up. It is similar technique to having crampons and an ice axe except here it is the ski poles and boots providing the three-point contact. 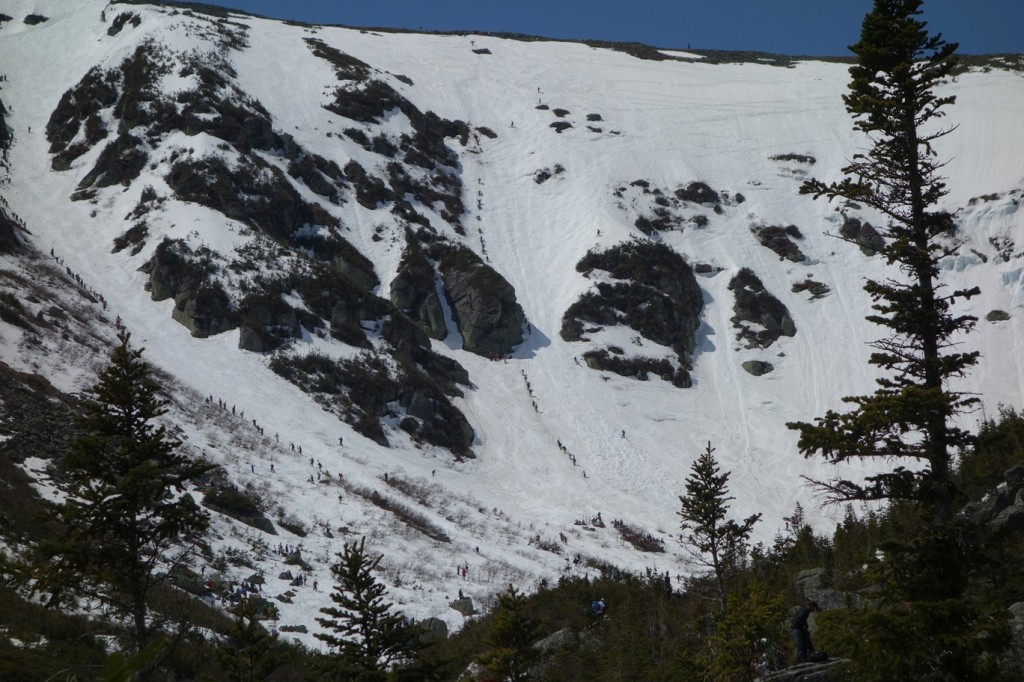 The Human Lifts! – a Train of Skiers Going up the Cliff

The hike to Tuckerman’s ravine starts off from Pinkam Notch on Lion’s Head Trail and then follows the Tuckerman’s ravine to  hermit lake hut. The most challenging part of the hike, at least for me, was the heavy backpack that weighed about 50 pounds with the skis and boots. I felt like a yak carrying a heavy load with the ski boots hanging around my shoulders and was pulled down with the weight, making it very hard to take even small steps and keep balance. Lesson learned for next time – I need to figure out a better way to carry the skis and boots such that the load is more balanced. 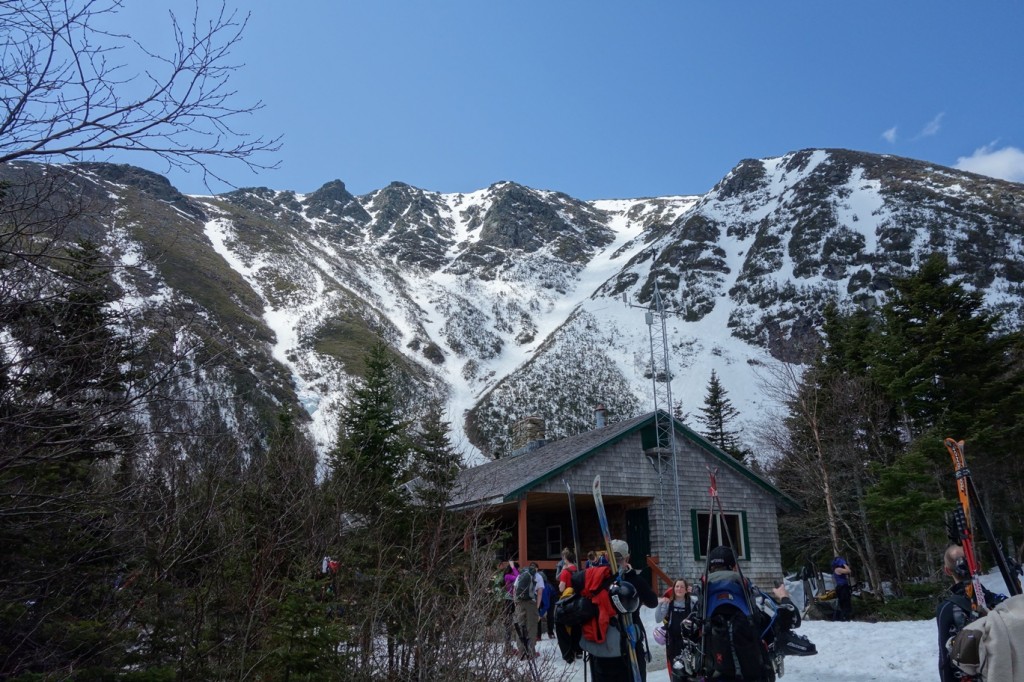 Hermit Hut – kind of like a base lodge with rangers, first aid and information

Hermit lake hut is like mission control with many rangers providing critical information about crevasses, avalanche risk, trails to avoid, etc. The hut is just a few minutes away from the “lunch rocks” – the base of the open bowl where hundreds of people seemed to be settled down as if watching a Warren Miller film on the world’s largest screen in 3D. 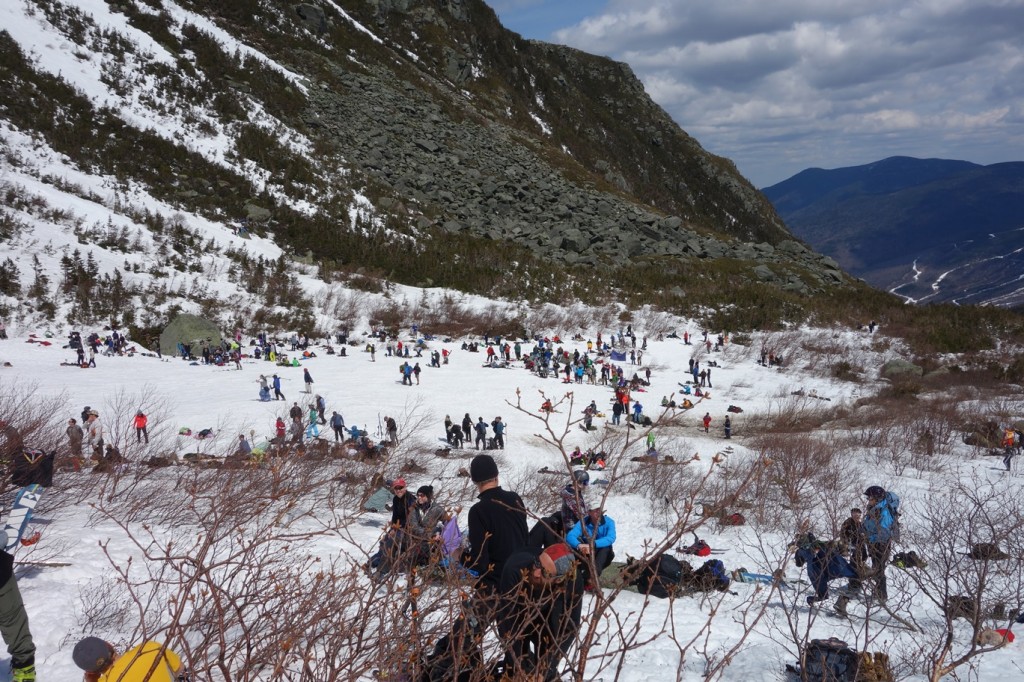 The sound of people cheering  fills the air as extreme skiers do jumps and make it successfully down the steep cliff. There are many trails down the ravine from the ridge, some steeper than others. Some are so steep that you can’t even see a few feet in front of you. The steepest section is around what is known as the headwall  – a nearly vertical section of the ravine with large rocks boldly jetting out.

How high you go up the ridge is completely dependent on your skill level – at least that’s what I was told. I am not an extreme skier by any definition – I enjoy skiing blue-square marked trails in Vermont or New Hampshire ski resorts and this is my first attempt to explore Tuckerman’s. I started to go up on a trail called “left gully” which is not as steep as the chute or other parts of the ravine. The challenge was that I couldn’t find a place to put on my skis safely without losing them. I kept going up and up, and I suddenly realized I was terrifyingly close to the top of the ridge. 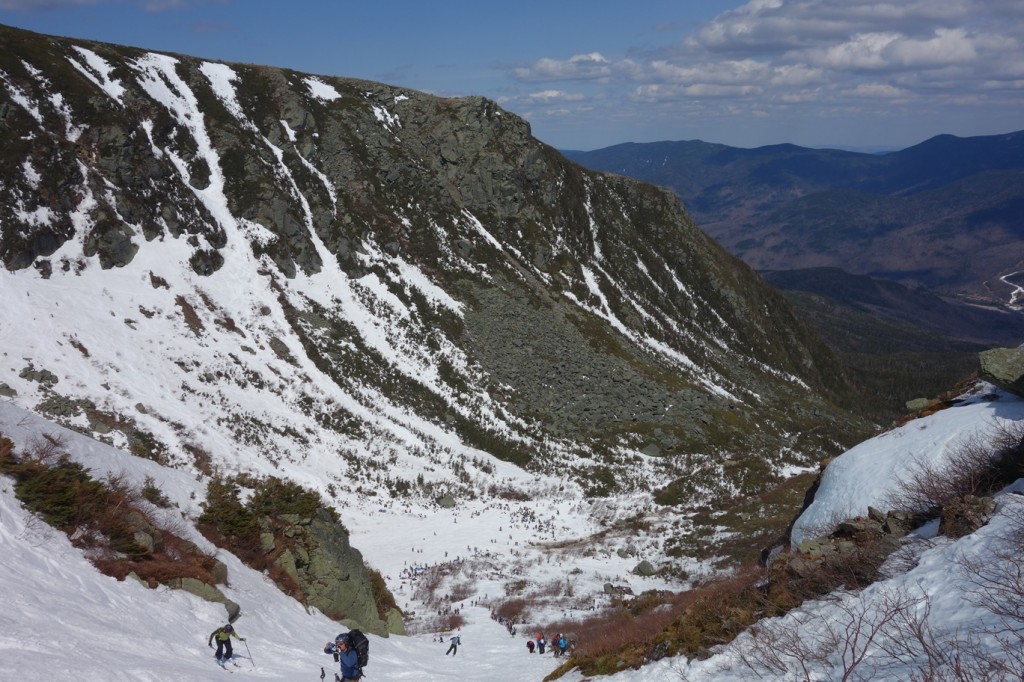 View From up High on Left Gully

Luckily, I got help from someone to put on my skis and started my way down. Fear overtook me and my turns were just not happening. Every now and then, other skiers would navigate around me, pushing down large heaps on snow, but I eventually made it down safely.

Just after 4 pm, we started to make our way back and it was an interesting sight to be stuck in a traffic jam in foot traffic. 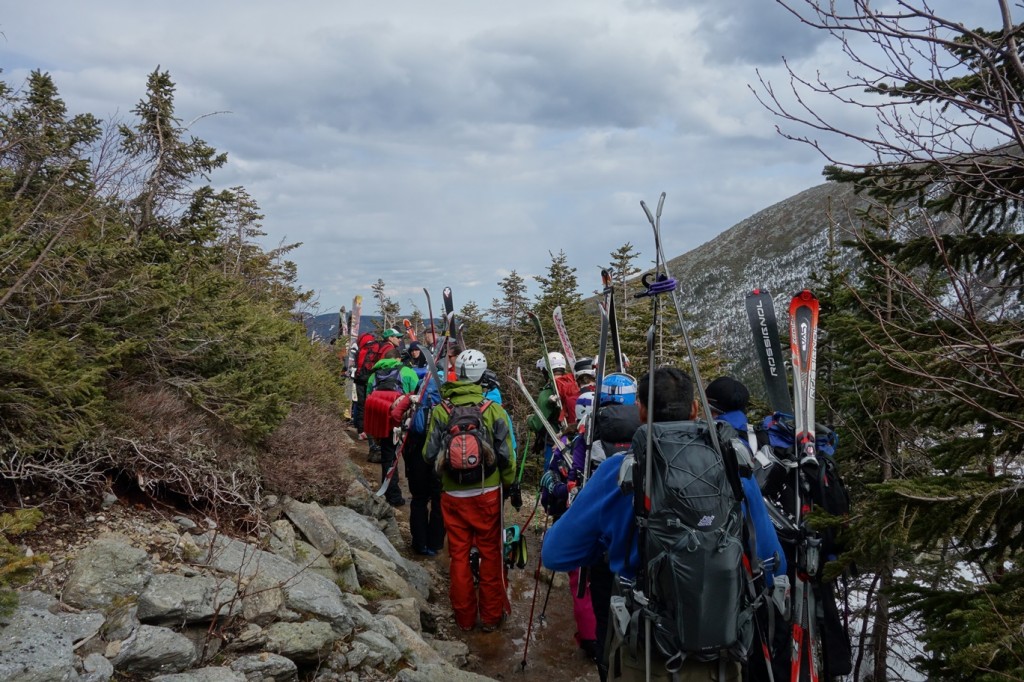 It seemed like everyone decided to leave at the same time. The narrow walking trail back to hermit hut is like a no passing zone with people moving slowly down the steep rocky section to the hut. Once at the hut, the Sherburne ski trail pretty much leads you almost all the way to the parking lot. This is a real fun trail – it is not so steep, but is full of large bumps and moguls and gets very narrow in some sections. 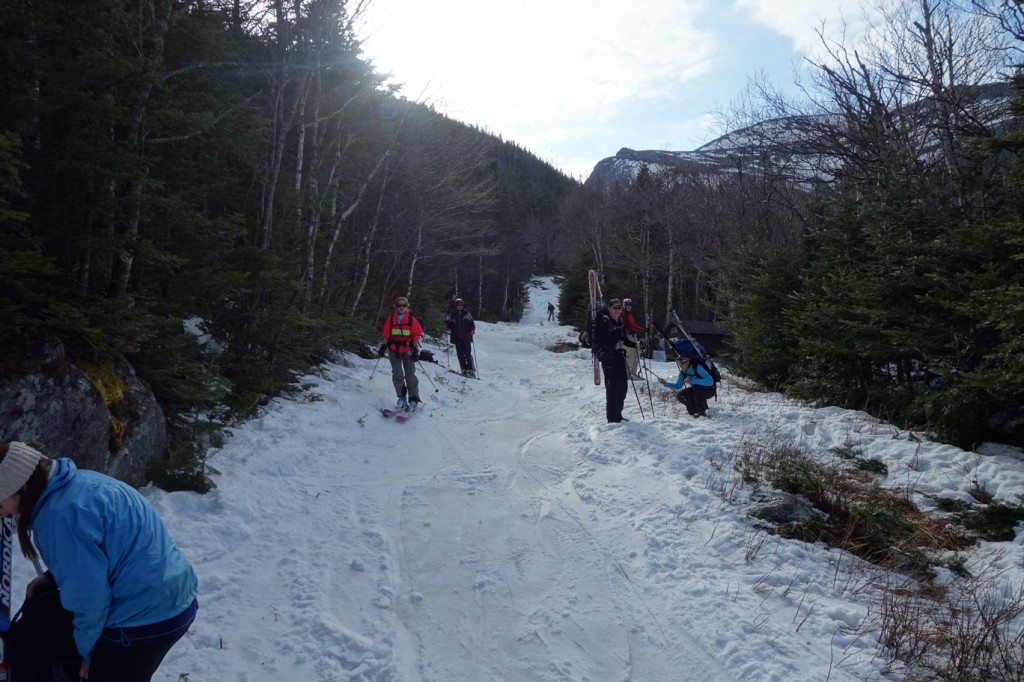 It felt so good to make it back – to put the heavy backpack away and head for some nice dinner at North Conway.