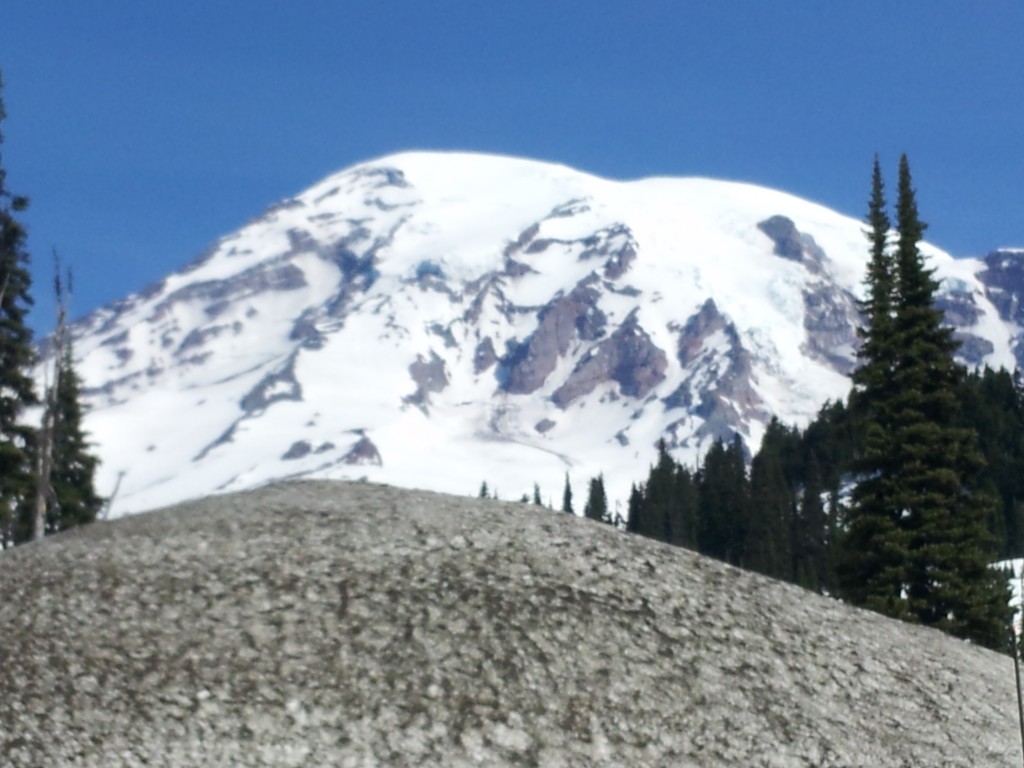 On May 12, nine hikers of Indian origin (Desi), from NY, NJ, GA, and IN set out to climb Mt Rainier, our hardest endeavor yet as a Desi Meetup group and the biggest organized Rainier climbing group on the mountain. Desis or people of Indian origin do not have a history of embracing climbing or mountaineering as much they do for engineering, Information Technology (IT) or other professions, though the Indian subcontinent is known for the Himalayan mountain range, home to 14 peaks above 8000 m (26,247 ft) including Everest. We, some very ordinary people, with no serious mountaineering training, set out on this adventure, taking precious time out from our families, work and other responsibilities of life, with whatever preparation we could do, physically, mentally and materially (.i.e mountaineering gear). We were in good spirits and good energy and started off with a training day that was just beautiful clear rare sunny day. We felt exuberant and excited with the training that felt like graduating from Hiking/Trekking to Mountaineering, on the heavily snow-clad slopes of Mt Rainier National Park in state of Washington. 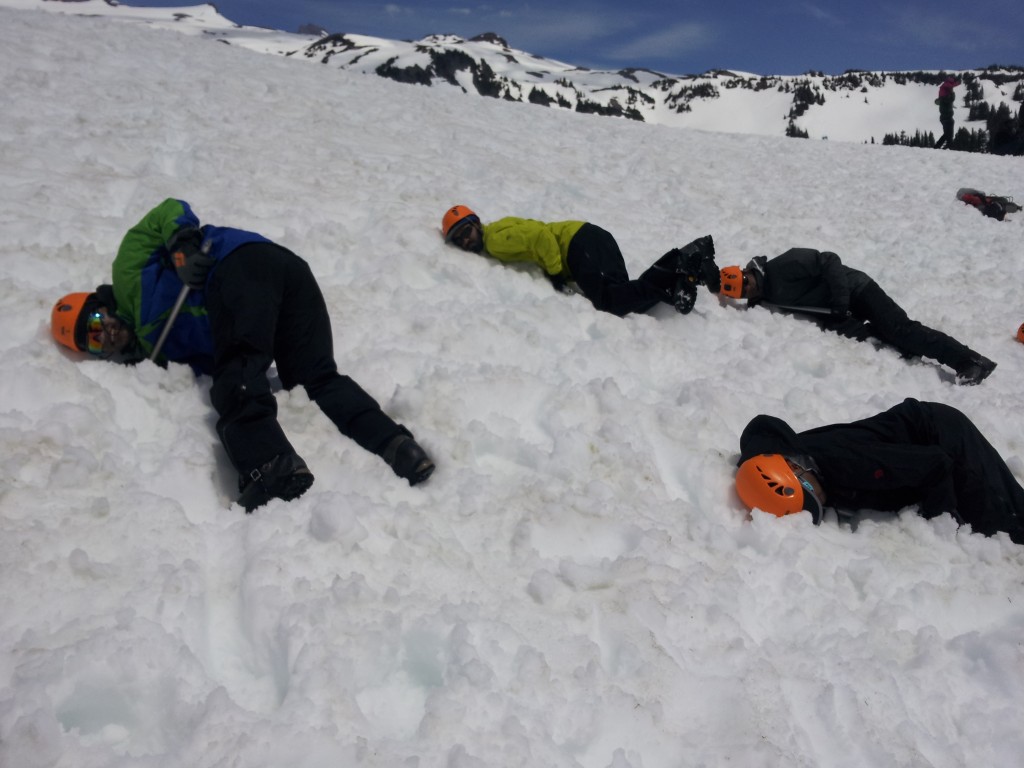 Training on Self Arrest (and team arrest) with Ice Axe

During the training day, we were introduced to the techniques of Snow climbing – Rest step, plunge step, duck step, Self-arrest, team arrest with Ice Axe, roping, anchoring etc in addition to critical  climbing logistics as managing rest breaks, snack packs (12-14 snacks of 200-250 cals), packing, clothes layering, and to cap it all, maintaining “Efficiency”. This was the most valuable learning from training – being focused and organized on the mountain. Weather was clear and we had beautiful views of the entire volcanic mountain, covered with Glaciers from Ice Ages many hundreds of feet thick; bluish color reflecting of it, pristine snowfields, stationary lens-shaped lenticular clouds at the peak etc. 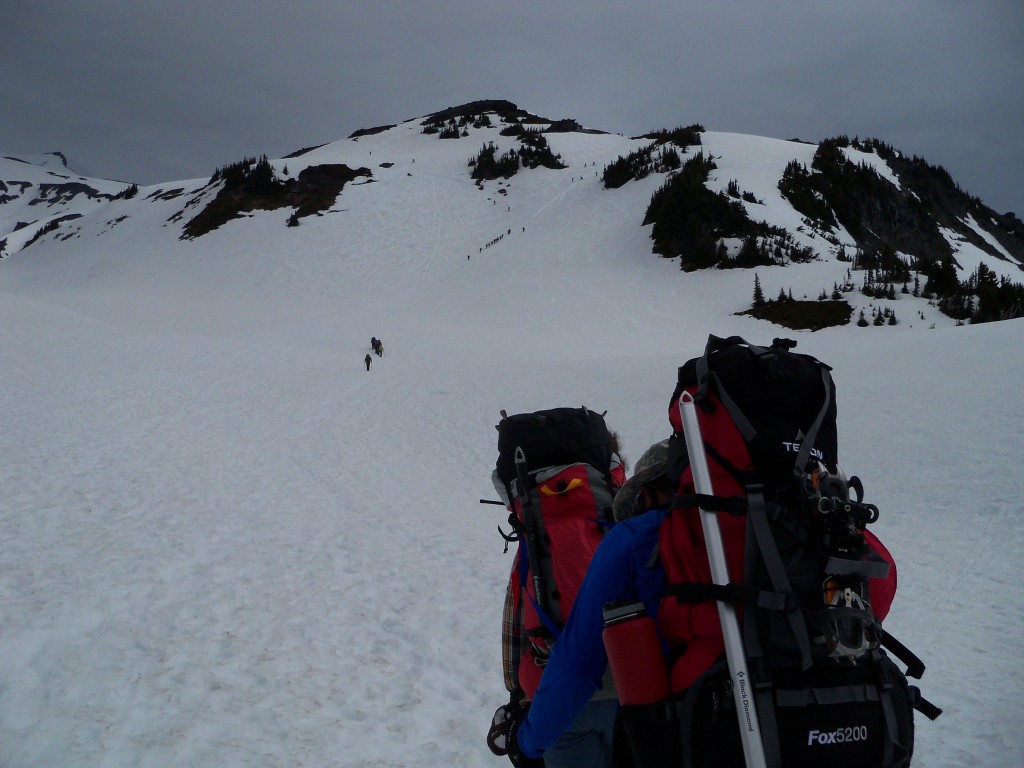 Walking up the snow field past pebble creek

Next day we set out to climb on a 2-day Summit climb which is essentially a continuous, grueling 30-36hrs adventure on the mountain. The goal was to reach camp Muir on day 1, at 10,060 feet from 5400 feet, in 4.5 miles, with a backpack of 40-45 lbs, completely on Snow terrain from paradise point. It had snowed 50 feet (600 inches) this season at the trail head and over 60 feet atop Mt Rainier and still snowing in May. 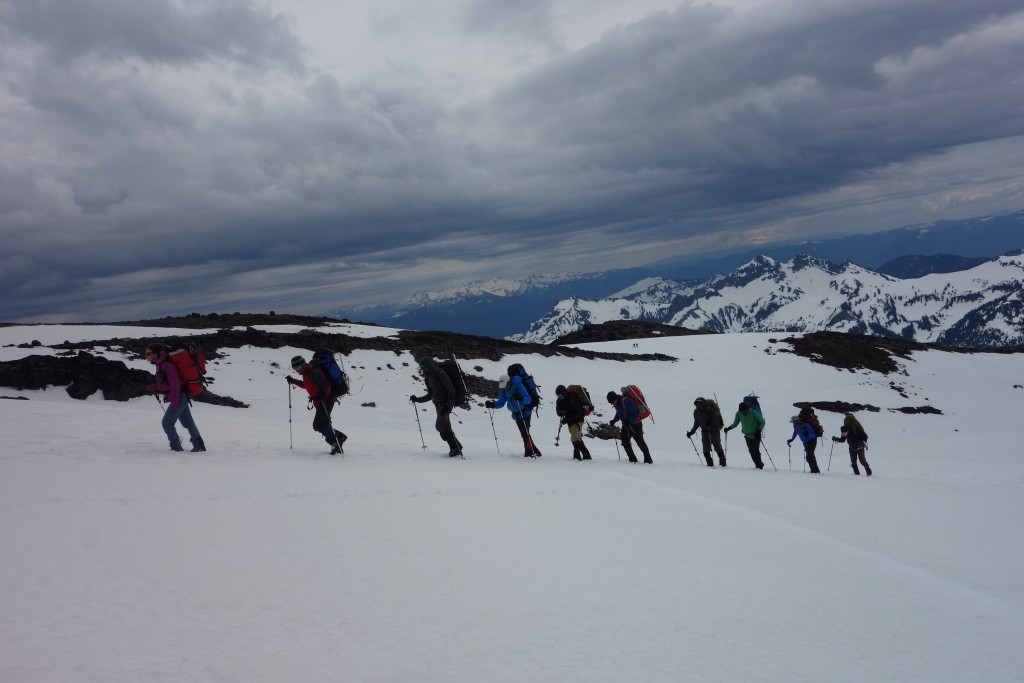 The entire group did very well despite of some physical hardships as exhaustion, cramps, tendinitis etc. For many, walking on snow with heavy boots itself was a first time life experience.  Mother Nature was cooperative and did not pose any major challenges to our human abilities. Upon reaching camp Muir, it appeared this was the hardest thing we had ever done physically and mentally in our lives, a continuous climb on snowy slopes, kicking the heavy boots in snow, firmly planting it to step up and climb. Mostly all were exhausted, on a constant uphill incline of 30-40 degrees and in some spots 50-60 degs. It was both challenging and scary at times, as a little slip could be life threatening, plunging, tumbling or rolling many feet down with heavy packs. 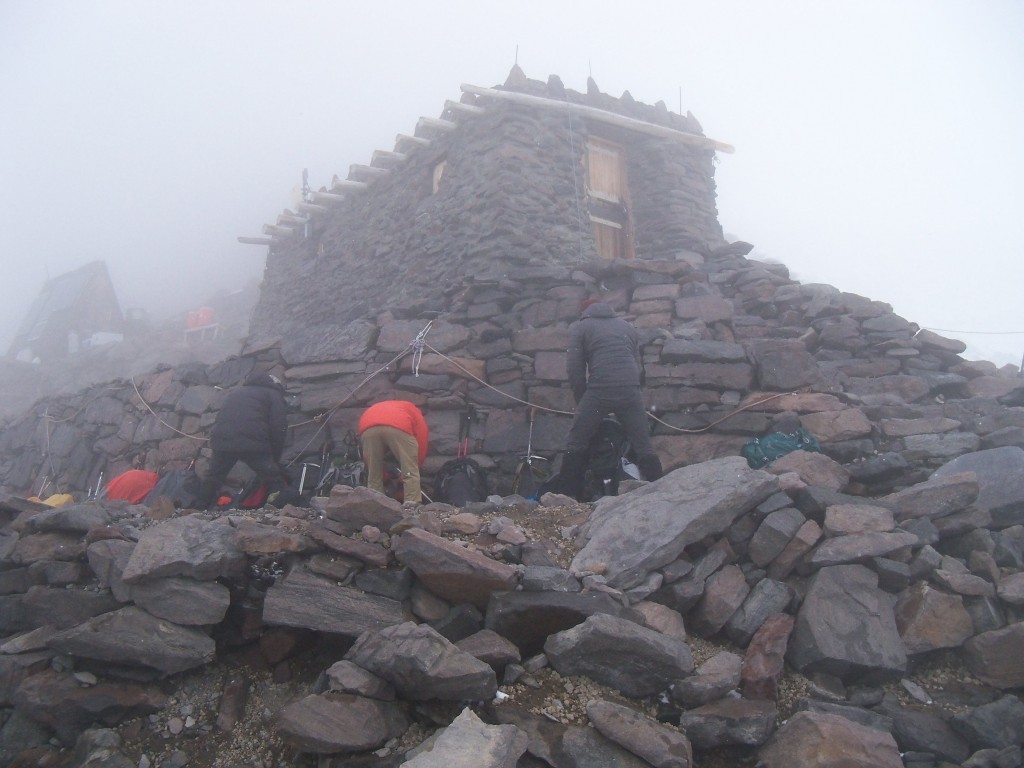 The team reached camp Muir on expected time at about 4pm after a grueling 6-7 hrs hard labor. This was just a preview of what’s next. The summit day would actually start at night sometime between 10 PM and midnight. We got a briefing that this next climb on upper mountain to summit is going to be even harder, faster pace, higher altitude, though with a lighter pack. We were expected to rest for a few hours, again being efficient in recovering our strength and energy, and then be ready to start anytime after 10 PM. Resting or trying to fall asleep  for 4-5 hrs at odd hours to the biological clock was a challenge on to itself, huddled in a small, 3-tier bunk shelter with 18 people at 10,000 ft.  The good part was that we were not in tents outside in the cold, however trying to get a nap on hard surface, in a mummy sleeping bag, with constant tossing and turning, snoring and miscellaneous night-time interruptions and noises, it was almost impossible to fall asleep, barring some lucky ones who had no trouble crashing, snoozing and snoring. And in no time, just when you are in a trance, at about 12.30am we get a wake up call to get ready for Summit climb. 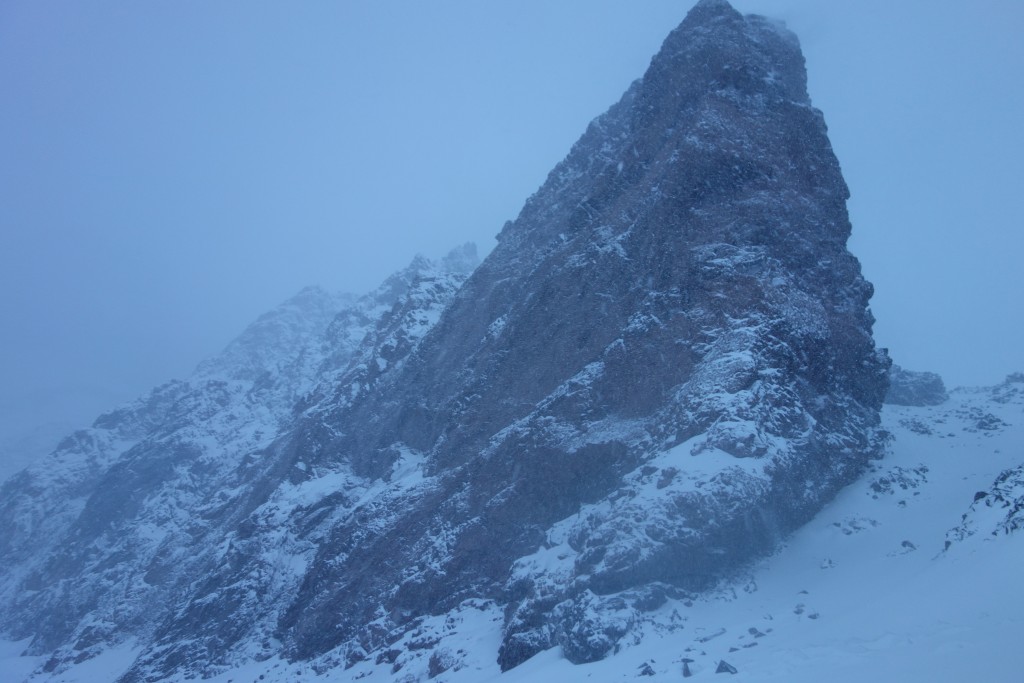 It had snowed all evening and night and winds were blowing hard creating whiteout conditions. Nonetheless, we were given over an hour to have breakfast at 2 AM and dress up with about 20 pieces of winter climbing paraphernalia that included multiple layers of precise clothing for head, hands, toes, upper and lower body in specific order, avalanche transceiver, climbing harness, boots, gaiters, crampons, helmet, snow googles, headlamp and Ice Axe. In addition, we had to pack the climbing bag with food, water and emergency/rest clothing. The scene was chaotic in the room as climbers were getting dressed, some missing items, some having things mixed up, some having questions, comments, concerns, taking and giving advice, some having wet clothing, water bottle leaks etc. 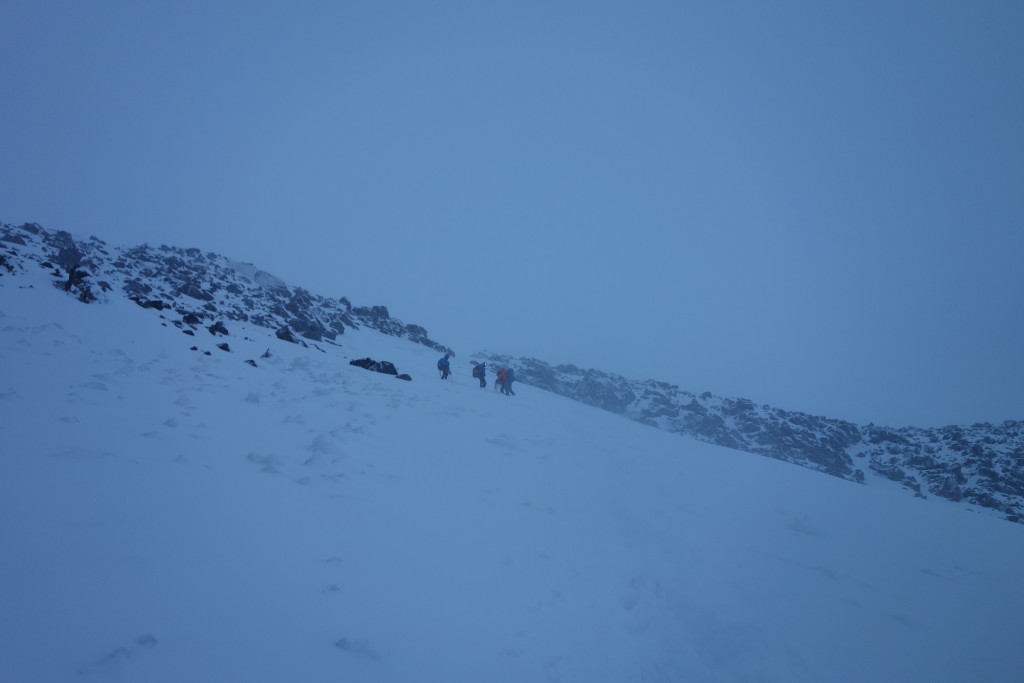 Somewhere along the Ingraham Glacier

The clothing and gear had to be precisely done as we cannot go wrong while on the Mountain. Any loose end of the gear could be fatal for the person or the team.  We were expected to climb from 10,400 feet, walking on two Glaciers, first on Cowlitz glacier and then on Ingraham glacier to reach Ingraham Flats which will be the first break. The Rainier Summit at 14,410 feet in another 4+ miles. The climb start was delayed due to difficult weather conditions.  We were later told that in longer expeditions elsewhere, the guides would not have proceeded but stay put in shelter, however in our case they decided to “give it a shot”, hoping that weather will clear up. On shorter expedition, guides do not have an accurate weather monitoring  support system, they play it by the ear, looking at conditions on the ground and hoping they get better. It was later estimated that it had snowed nearly 3 feet on the upper mountain and still snowing and windy. We were all roped in a pre-set team of 3 climbers along with a guide and had to climb in unison, maintaining appropriate pace and distance in glacier traverse mode. This is key to safety and successful climb. Too much slack, and one can trip and fall and also not useful in crevasse rescue. Too slow and getting tugged along also carries the same risks.  We set out to climb at around quarter to 3 AM with our headlamps shinning brightly and light reflecting back from the powdery snow into absolute pitch darkness around.  With all the headlamps shinning atop a curved trail in the dark, it appeared like a beautiful pearl necklace on the mountain. 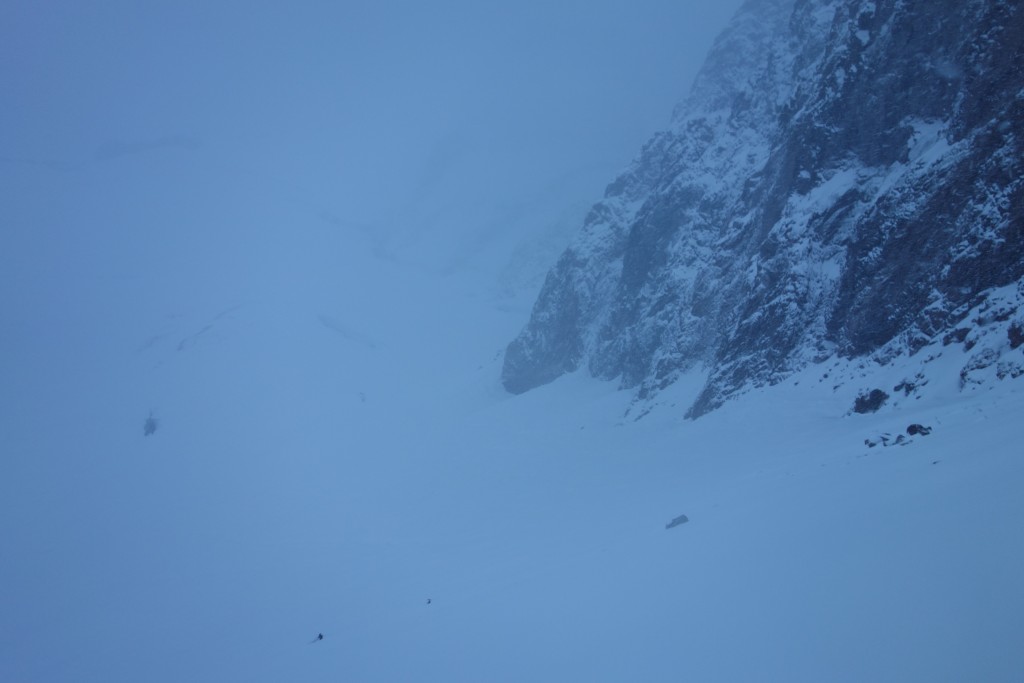 The unexpected climbing challenge was due to the conditions of fresh deep snow on the ground. Every step caused the foot to get buried in deep snow before finding a footing, slowing our pace and being more tiring. The surface below was uneven in places and led to tumbling here and there. The  guide pace was faster too. If one member slowed, all others felt a rope tension. With cold winds, falling snow, some having improper gear fitting, some feeling tired from lack of sleep, some developing physical issues as headache, hip pain, knee pain, sinus etc., the climb became an ordeal for most. The way guided team climbing works is that you have to commit going until the next break stop, typically after about an hour to hour and a half of climbing. You cannot just stop in between and decide to return, unless you have debilitating pain. The person and the team has to be re-roped and a guide has to come back, maintaining uphill climber-guide ratio. This adds to climbing delay to the entire team of 3 x 3.  As it turns out, some members had to return mid-way due to physical pain beyond management. Remember, its not climbing UP but also DOWN that has to be accounted for. As they say, climbing up is optional, climbing down is mandatory. So better to call it quits sooner rather than later, before the pain gets worse that puts the entire team in jeopardy. 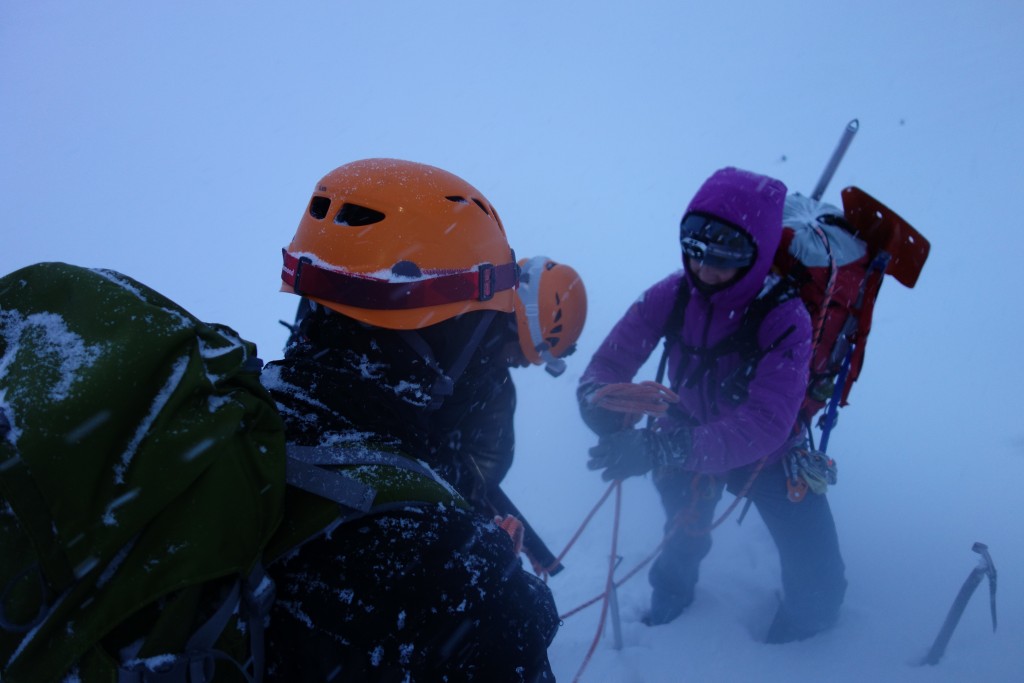 Near the Ingraham Flats

Looking at the time it took to reach Ingram Flats (twice longer than expected), trail and weather conditions and climbers physical condition, more team members decided to return after the flats. Day break happened and there were some beautiful views of Little Tahoma and Glacier bottomless crevasses, not knowing that in the night, we were just 50 – 100 feet away from them. The crevasse fall and rescue training, we took a day earlier, had a purpose here, gave us the shudder. Team members were re-roped and the guides led some members to the Disappointment Cleaver, wherein the guide led on steep straight incline, breaking new trail rather instead of taking switchbacks. It was a killer stretch for many and the guides made the call to return from that point on due to treacherous conditions. No one that day climbed beyond that point. The mountain had made its call with weather and conditions turning worse. 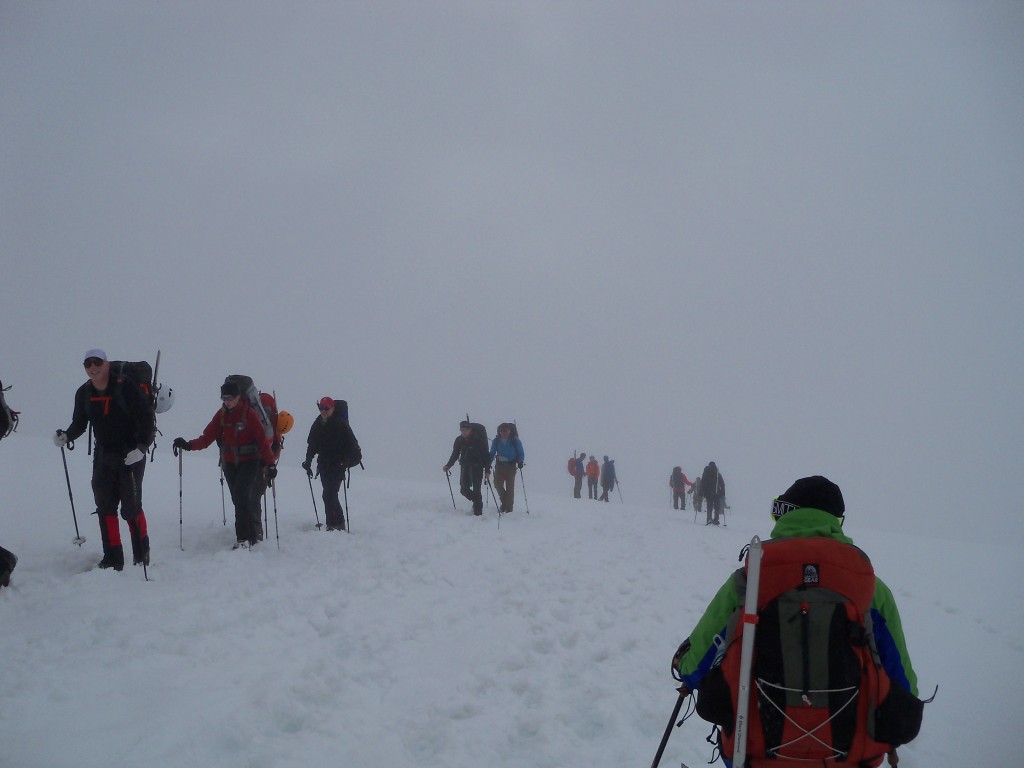 Another team going up to Camp Muir on our way down

All teams returned safely to camp Muir. After some rest, we prepared our packs to return from camp Muir. It was fresh powder on way down as well. The climb down was fast, fun, though not necessarily easy from fatigue as well as there was no trail and feet were buried and imbalanced at times. A major fun highlight coming down was couple snow slides  – about 200 feet long on a 50-60 degree incline (we climbed on way up). This was  certainly an enjoyable experience after a long hard day on the mountain. The climb down ended about 1 pm and this was the end of an amazing adventure of our Desi group.

Some of us spent the rest of evening at Highlanders restaurant, a typical American mountain hangout, where we sang Desi songs at the Karaoke and played a few games of pool, darts, with drinks and burgers and celebrated the experience. A perfect ending to an extraordinary journey on the mountain. 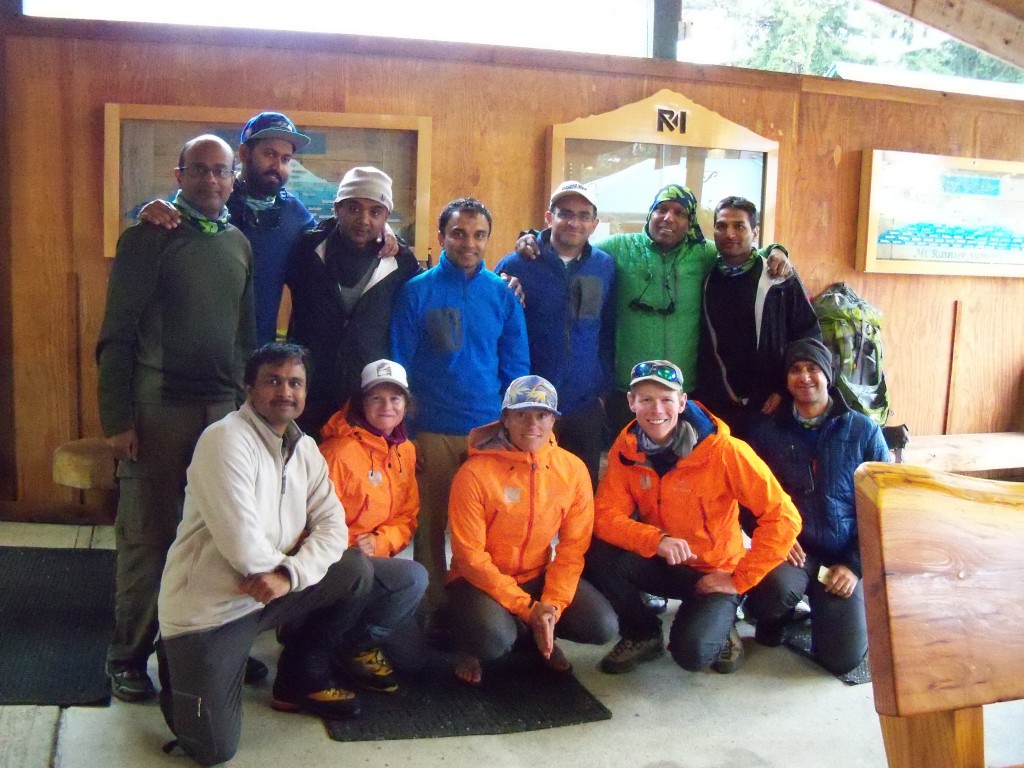 Team safely back at base camp with our guides – Bridget, Lia and Ben (left to right)

For many the glory in climbing a mountain is to “Conquer” it by summitting, however this team felt satisfied with the experience knowing that the real glory is conquering yourself, advancing yourself, which is not noticed by the external eye but only felt by the climber. Climbing makes you more humble and realize your inner self. Many great Indian sages went to the Mountains and lived in the himalayas to conquer themselves, conquer the human ego. Keep climbing and you shall conquer. Have fun and stay safe.