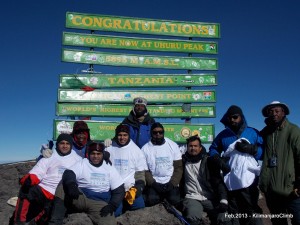 We made it to the roof of Africa, Uhuru – meaning freedom, and it was an emotional moment more than anything else. Tears and a feeling of disbelief pierced our hearts and minds at the sight of the bright green summit sign. Shimmering in the morning sun, it read “Congratulations, you are now at Uhuru Peak…”  The glorious date and time: 02-13-2013 at 8.30 AM.

We  had started four days ago from Machame gate with a 6-day plan to summit and return to Mweka gate.  The first day trek to Machame hut went through a rain forest and yes, true to the name, it rained on the way up. Just before reaching Machame camp (9400 ft), we got our first glimpse of the mountain in all its grandeur – the snow-capped summit with its steep rugged sides, tapering away from the broad rim of the crater. 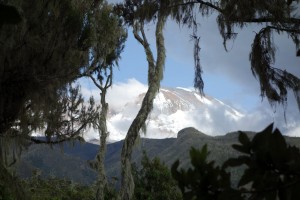 The second day towards Shira Camp (12,500 ft) was more challenging with some steep climbs along a rocky ridge for the first part, leading us into the Moorland – a habitat sparsely vegetated with small shrubs, wild flowers and giant Senecio plants. 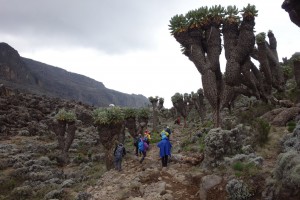 The total distance to cover on day 2 was only three miles, but we felt the altitude during this hike and we went “Pole-Pole” (pronounced Polay Polay) meaning “slow, slower” in Swahili as suggested by our guides Naftael, Focus and Hilary.  Shira camp was different – it was one large patch of tents across a flatland overlooking the grand mountain. This was a noisy camp with a crowded feeling, rampant with white-necked ravens looking to scavenge on leftovers. This was the night where we definitely needed our ear plugs to get a decent night sleep. 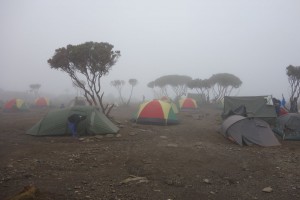 The next day to Lava Tower (15,600 ft) to Barranco camp (13,000 ft) was a real acclimatization day as we followed the rule of “climb high, sleep low”. Compared to day 2, this was a gentler but a steady climb in altitude with the weather oscillating between a blazing sun and a thick cloud cover with a cool breeze.

Most people experience some form of AMS at Lava Tower which is the highest point on the days hike. Luckily, our team only had mild headaches that were easily managed with Tylenol/ Advil. Perhaps all the yoga and breathing practice paid off after all. After lunch at Lava Tower, we pushed on towards Barranco with a steep climb down and then up and again down to camp. After about 10 hrs, Barranco camp came into view as we crossed the river gorge surrounded by giant Senecios.  As usual, our tents were already setup and hot tea with popcorn and crackers was waiting for us at the dining tent. 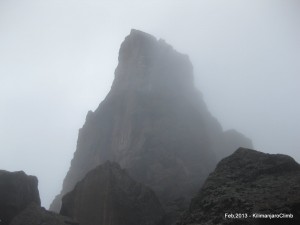 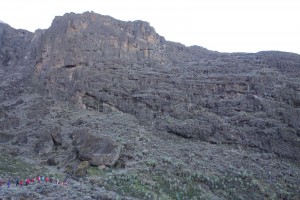 The climb itself is not technical, as we climbed along steep ridges of the wall. It took us about an hour and fifteen minutes to be at the top of the wall. This was the day where it was really important to breathe well and go really slow. After the wall, we made our way to Karanga for a brief stop for lunch and continued onto Barafu Camp – the highest and the last camp before summit at almost the same altitude as Lava Tower.  On this day the terrain was a high alpine desert with lava rocks all around us on a rough seemingly lifeless and water less terrain.

Once at Barafu, we got just a couple hours of rest after dinner as we woke up at 11 PM to get ready for our midnight hike to the summit. Thus Day 5, the summit day, was really a continuation of day 4 with minimal rest to our bodies. 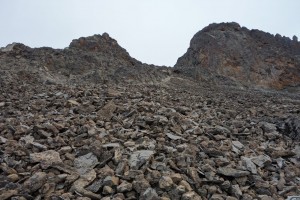 As we took sips of hot water and hot tea to keep ourselves warm under the midnight cold weather, I wondered about how quickly we went from a rain forest to moorland to a desert to arctic conditions with temperatures well below freezing and a continuous wind blowing in our faces.  Looking up the mountain, we saw a stream of moving flickering lights on the mountain – several hikers had made an early start for the summit. 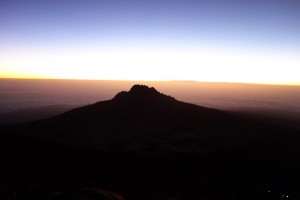 Mt. Meru on way up to summit at the crack of dawn

This was the part of the trek where it was important to remember that progress is always one step at a time, but slowly and surely, the summit can be reached. A mountaineer must allow no other thought enter the mind.  Every moment was focused on breathing well and taking the next step without worrying about how much more is left to do and without looking at the time. One step at a time.

Finally at the break of dawn, we were at Stella Point,  and this is where each of us felt our first sense of accomplishment.  We didn’t stop here too long as the highest point, Uhuru peak, was still further away and we continued on the mantra of one step at a time, somehow dragging ourselves up the mountain to finally reach the summit. As Bala put it very well: “It was as if an external force dragged me from Stella Point to Uhuru peak. It wasn’t me who did the walk. Mt. Kilimanjaro wanted us to climb and made it happen.” We were truly humbled and felt honored to be on the mountain. As Naftael, our chief guide, said: “People from all over the world come here and have surrendered to this mountain.” That struck a chord with me – “surrender to the mountain”. We surrendered to the mountain first and the mountain allowed us to summit; it feels arrogant to say we conquered the mountain. Rather, summiting a mountain is a very humbling experience. 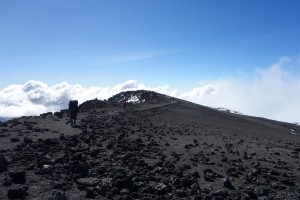 At the summit, while some were in tears of joy and disbelief, I felt a sense of oneness with the mountain. It felt strange, as if by destiny, the most unlikely group of 6 of us, were there on the summit of Kilimanjaro at 19,340 ft. It was a historic day for us. 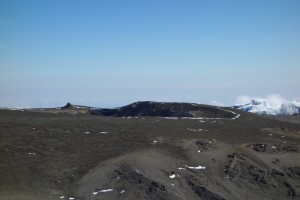 After relishing the views of the Reusch Crater and  the icefields on top of this great mountain, we started our descent back to Barafu camp for a brief rest and then continued our way down to Millenium camp (12,600 ft). We had hiked 25 hrs out of the last 30 hrs – making this likely the longest walk of a lifetime.

We did it! The first of the seven summits, Kilimanjaro will always have a special place in our hearts. We made it, from above the clouds, down safely except for some sun burnt noses and black toes! I tell everyone on the team – “this experience will change your life. You are special to have climbed Kilimanjaro and there is much more to come. This is just the beginning”.

6 thoughts on “Making it to Uhuru Peak – A Kilimanjaro Experience”